The government has confirmed details of its extended furlough programme with the state continuing to pay 80% of employees' wages up to a maximum of £2,500 a month until the end of August.

The plans were announced by chancellor Rishi Sunak at Downing Street’s daily covid-19 briefing this afternoon. 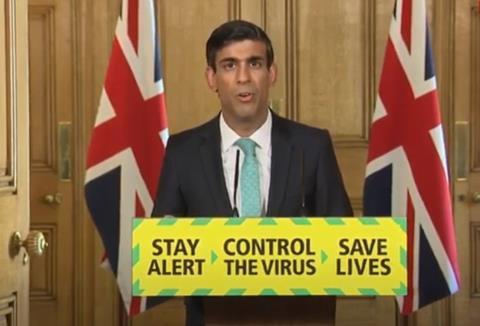 But Sunak (pictured) said employers will start to be responsible for paying staff’s National Insurance employer contributions and pension contributions from August.

The government will continue to pay up to 80% of furloughed staff’s wages that month.

In September, employers will have to start paying 10% of the 80% figure which will rise to 20% the following month with the government paying the remainder.

Sunak said: "I believe that it is right in the final phase of this eight-month scheme to ask businesses to contribute alongside the taxpayer towards the wages of their staff."

The government also announced that employers will be able to bring back furloughed employees on a part-time basis from 1 July with employers paying their wages while in work.

Sunak also put a deadline as to when companies already using the scheme will still be allowed to put staff on furlough saying all employees must be registered with it by 10 June. The scheme will close to new entrants on 30 June.

And he said that the self-employment income scheme will be extended with applications opening in August for a second and final pay out.

This week, HMRC said one million employers had claimed £15bn for 8.4 million furloughed employees between 20 April and 24 May.

Earlier this month, the government said it was extending the furlough scheme, which had been originally due to come to a close this month before being extended until 30 June, until the end of October when it will finish.