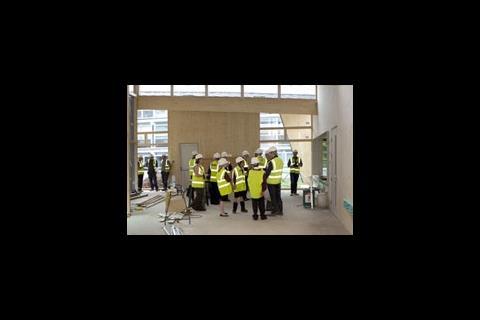 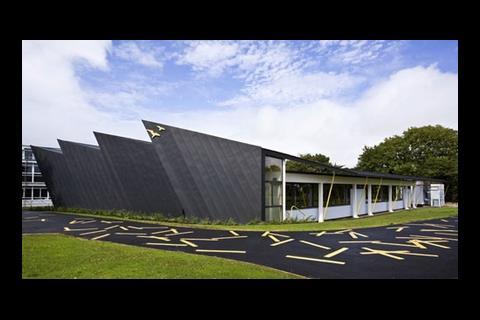 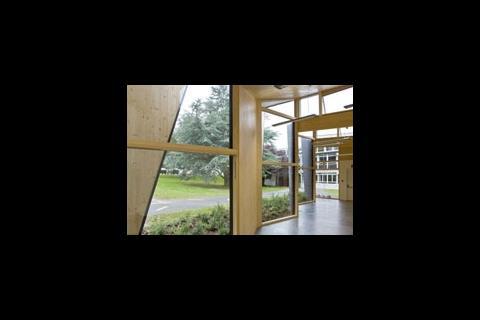 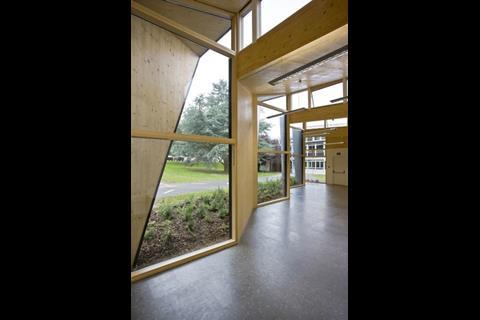 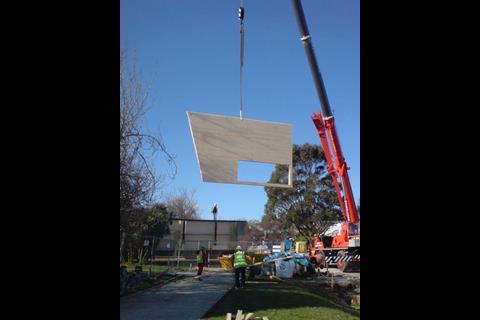 The squawking of resident seagulls informs visitors that the new Falmouth School Design and Technology Block is situated near the coast in Cornwall. And, this striking saw-tooth shaped building’s motif pays homage to the birds; a pair of bright yellow gulls suspended in flight adorns the sharp black zinc westerly façade.

But looks aren’t everything, especially when the client is demanding an environmentally conscious design that will drastically improve and extend existing teaching facilities to enable new types of learning to be accommodated. The identity of this client: a group of 13 year old pupils from the school itself.

As part of the Sorrell Foundation’s ‘Joinedupdesignforschools’ initiative, architect Urban Salon was paired with Falmouth School to develop proposals for a scheme to improve the school’s facilities.

In 2004, a team of students and Urban Salon worked together to create a design that would see the design and technology block refurbished and extended to enable it to include 21st century equipment and teaching aids.

The client team then partitioned the school, local council and DFES for funding and, what started out as an educational process, suddenly became a live project. Well, suddenly probably isn’t the operative word, when it comes to construction.

In the time it took to design and attract funding the original client team had grown up and left Falmouth School. So, in 2006 a new group of students undertook to continue the project.

They critiqued the original design and suggested a range of changes, including making the new build element a single storey and altering the orientation of the building to give the school a new landmark. The resulting building is now complete and being used for the first time in this new school term.

The new build element of the project, some 95m², is a solid construction of engineered timber panels from Austrian supplier KLH. These were delivered to site pre-cut, reducing the project timeframe.

The new building is highly insulated with Celotex panels and clad in a recyclable zinc skin. The ingress of natural light is encouraged with north lights, which also open to provide natural ventilation. The zinc roof form of the new building folds down and creates a shade to the entire south-facing elevation of the existing building, to reduce solar gain.

The existing 700m² building has also been double glazed, reinsulated with Paratex PlusKN and rendered to provide much better thermal performance.

Internally, under floor heating is fuelled from the school’s existing district heating system. Electrical power to the block will soon be supplemented by renewable energy from a wind turbine that is being erected now.

They were extremely knowledgeable; they researched what they didn’t know; and, they would be quick to spot potential problems in the design

“The building is very sustainably designed. The client insisted upon it,” says Alex Mowat, director of Urban Salon.

“At each stage of the project we had to present to the students in the client team, just as we’d do on a conventional job.

“And, any thoughts we had of it being a case of coaxing them through the process were soon dispelled. They were extremely knowledgeable; they researched what they didn’t know; and, they would be quick to spot potential problems in the design.”

Urban Salon soon realised that the project was very important to the students and so both the designer and client team approached it with real enthusiasm.

“All design decisions were passed by the client team,” says Mowat. “For example, the engineered timber structure was chosen following a presentation by the structural engineer of the benefits of steel, concrete and timber construction techniques.

“The students chose this option to best minimise the carbon footprint of the building.”

Decisions on all aspects of the project were down to the client team and, when budget constraints forced a rethink, reluctantly the students sacrificed the wind turbine in order to enable the completion of the rest of the job. However, the students now had a fire in their bellies and they have since raised extra money and progressed a separate planning application for the turbine.

The students even met with neighbours to discuss the impact of the new renewable source. On its installation it will be the crowning glory of this sophisticated new design and technology block.

“Work started on site in February 2008 and the main structure went up just before the kids went off for summer holidays,” says Mowat.

“The whole experience has been great for them because they’ve seen day-to-day how a construction project materialises, right from the initial concept to completion.

“It has been a pleasure for us to, working with a well organised client group, who were very sophisticated and professional. And the result is a good looking building that we are proud of and they are eager to use.”