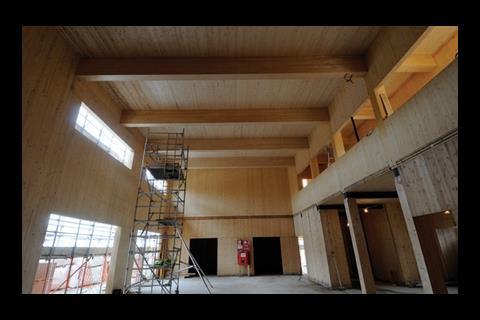 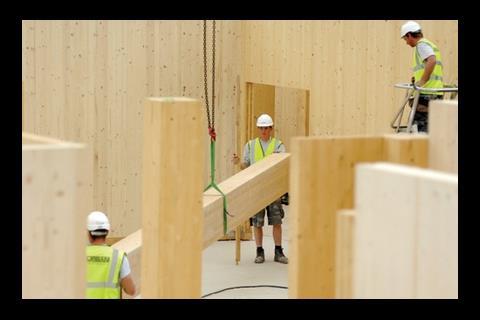 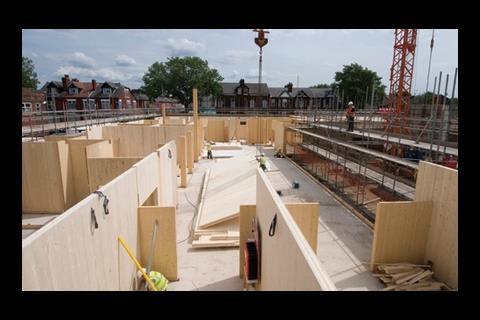 No need for wishful thinking: using solid timber panels as a construction material will bring speed and sustainability to the government’s school building programme. Stephen Kennett looks at a down-to-earth solution

Schools have come a long way since the draughty classrooms of the Victorian era. Take the planned Waignels College in Woodley, Wokingham. The £29m college, being built under the Building Schools for the Future academies framework, will be constructed from solid timber panels, modelled by computer and precision-machined to millimetre accuracy in a factory in Switzerland. It’s an efficient process, cutting down on waste and reducing the embodied carbon of the building. But perhaps its biggest asset, when it comes to meeting the government’s target for replacing and renewing every secondary school in England by 2020, is the speed at which these schools can be built.

You might be familiar with the system planned for the Wokingham school. It was showcased by Willmott Dixon at the Rethinking School of the Future project it built for BRE’s Offsite 07 event. This demonstrated what it thought the school of the future would look like and the sort of construction techniques that would be used. According to George Martin, head of sustainable development at the company, they were the last to start construction at the event and the first to finish. “The structure was up in four days and it was watertight in six,” he says proudly.

That was a one-twelfth sized development, but you won’t have to wait for Waignels College to be completed to see the pioneering system in a full-sized scheme. The contractor is now on site in Manchester with a primary school that uses the same Eurban “flat pack” approach.

Less than a 10-minute car journey from Manchester’s Piccadilly train station, the site of the St Agnes primary school is in the middle of a built-up residential area. Yet despite the constrained site, Manchester council wanted to increase the school capacity from 210 pupils to 350 as well as include a 45-place nursery.

Bernard Cole, framework-one manager with Manchester council, admits it was a challenging brief. “What we wanted was something that could almost land here from outer space and be ready to use,” he says.

It was just the sort of project to suit the Eurban system, says Martin, and having already completed two conventional primary schools for Manchester under its framework agreement, Willmott Dixon pushed for its adoption. The council was open to the innovative approach. “There are always risks but we are happy to push boundaries,” says Cole, who had to convince the headteacher and the governors. “They were coming from a very traditional Victorian school and initially they were wary, but they got on board.”

But along with the attraction of the faster build times, the other reason for using the system was sustainability. It’s estimated that 6,307 trees are being used in the construction of the school, locking in 2,290 tonnes of CO2, and although the Department for Children, Schools and Families’ extra funding for cutting energy use doesn’t cover embodied energy, Martin says the approach tackles in one swoop the social, economic and environmental challenges of sustainability.

The school is spread over three storeys, with a sports hall and nursery on the ground floor, six classrooms on the first floor, another three on the second and a rooftop play area. While the pupils and teachers decamped to a temporary “village”, the old building was demolished.

Eurban bridges the role of engineer and contractor for the structure and shell, meaning it can optimise the design and address buildability issues at the outset. “There’s a lot more investment in that area up front,” says Jonathan Fovargue of Eurban. “We have a lead-in of 12 or 14 weeks from order to first delivery.”

Once the groundwork contractors had completed their work and the floor slab was cast, the site was handed over to Eurban. The entire building structure was brought to site in just 16 lorry loads. The largest panels measure 3m x 13m. Transportation is the main restriction on the size of the panels, says Fovargue, but from a structural point of view it isn’t limited.

The panels, which are manufactured to tolerances of 2mm with all the openings for the doors and windows cut into them, sit on a timber base plate fixed to the concrete floor slab. Assembly starts from the corners with temporary bracing used to hold the first panels upright until enough of them are in place to make the structure self-supporting.

They are then fixed with large, 750mm-long screws. “All the components are pre-drilled so you know where the screws are going. You can just do a visual check to ensure all the fixings are in place,” says Andy Smith, senior building manager with Willmott Dixon.

Two panel thicknesses are used: 135mm for the walls and 169mm for the floors. Where the walls need to meet the acoustic requirements of BB93, an acoustic liner is sandwiched in place with another 24mm panel.

It’s taken Eurban just eight weeks to complete the shell and structure. The roof membrane is now being laid and the scaffolding is going up for the brickies to start on the external skin. The building isn’t yet watertight. The original programme was to fit the windows at this stage but because they’ll be bricking up to them, it was felt the finish might be compromised.

Two questions often asked of the system are: does it make a difference building in the rain, and what about the risk of fire? “Putting it up in the rain is inconvenient, but it has no effect on the panels,” says Smith. “The client was worried but we have a moisture meter here and we are well below any limits. The system releases moisture very readily; you’re not trapping moisture within it.”

As for fire, the school’s insurers were initially nervous. “Timber burns very predictably, and that is its virtue because you can make calculations for its structural integrity,” says Fovague. “You can deliver 30 minutes’ or 60 minutes’ performance simply by the thickness of the panel.”

There are two key developments on St Agnes that resulted from the Rethinking School showcase. “One of the things we established at the Rethinking School was the desire to show off the timber and to use it as the finish,” says Martin. This meant going back to the factory and changing the manufacturing process to give a much smoother and more refined finish. “Essentially it is like a slice of glulam beam applied to the surface,” explains Fovague. “It is still an industrial board and still has a random finish, but it is a better finish than previously and it helps the decorators with their prep work.”

The other development was thermal mass and acoustics.The answer has been to lay 600mm x 600mm concrete slabs on to an acoustic barrier which sits on the timber floor. These are topped with 30mm of high-density fibre insulation, then the underfloor heating system and finally a 50mm screed. Eurban is now working on developing a hybrid floor that will incorporate some of these acoustic elements to avoid this type of work having to be done on site.

Completion of St Agnes is due in March next year. Cole says the council is exploring the potential for using the system to deliver more primary schools in Manchester. “One of the challenges is agreeing a layout that can be replicated. Each school site is different and we also have issues with headteachers – some of them want more traditional layouts while others are intererested in more transformational types. You might be able to tinker within 5% or 10%, but that will be it.”

Although Manchester’s BSF programme is too far down the road to use the system, it is being used on a number of schools elsewhere. For example, Kier Eastern is working with Ramboll Whitbybird on the £11m St John Fisher school in Peterborough. It uses cross-laminated panels made by Austrian firm KLH and includes a 2,650m2 teaching block and an 18m x 34m sports hall. “These two blocks are the largest cross-laminated timber panel structures in Britain at the moment,” says Richard Vipond, Kier Eastern project manager. “But I can see that they won’t be for long.”

How to build a flatpack school in four easy lessons

Construction of the wall panels for the upper storeys continues. To reduce the thickness of the floor panels on particularly wide spans, timber beams add support

The waterproofing membrane for the roof is laid. A variety of external cladding options can be employed

The panels are available in a variety of thicknesses depending on the structural requirements and can be used to create structures up to 10 storeys high. They are self-supporting in two directions so need no other additional framework and are used as load-bearing walls and floors.

Where additional support is required – for example, on very wide spans – they can be combined with glulam or steel beams. Because the timber locks in CO2, the company claims that for every one cubic metre of timber used as a substitute for brick or block, about 0.8 tonnes of CO2 emissions will be saved.

Originally appeared in Building magazine as: 'What we wanted was something that could almost land here from outer space and be ready to use' - using solid timber panels to build schools