Firm pays out to settle a £9.9m High Court dispute over alleged failings on an abandoned tower project in Manchester 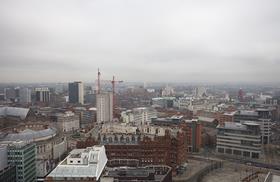 Faithful+Gould has paid out £3.35m to the Bank of Ireland to settle a £9.9m High Court dispute over the consultant’s alleged failings on an abandoned tower project in Manchester.

The Bank of Ireland sued Faithful+Gould (F+G) in 2012, claiming the firm failed in its duties as the bank’s quantity surveyor on Issa Developments’ £25.6m 24-storey Sarah Tower.

Work halted on the 24-storey tower in 2008 after contractor BS Construction fell into administration. Bashar Issa - the owner of Issa Developments and BS Construction - was declared bankrupt a year later.

The Bank of Ireland - which provided the majority of funding for the development and approved a £15m loan facility for Issa Developments - claimed that F+G failed to effectively appraise project risks and the capabilities and financial strength of contractors, and did not effectively monitor progress.

In its defence F+G said it gave the Bank of Ireland sufficient warning of the risks before and during the process.

Details of the £3.35m settlement, paid by F+G to the bank in January, emerged this month in a High Court judgment on a subsequent Part 20 claim by F+G against property agent CBRE in an attempt to recover some of its losses on the job.

Mr Justice Edwards-Stewart ruled F+G had “failed to prove” CBRE’s actions caused any of the bank’s losses, but found that CBRE had made “gross errors” in its preparation of a development appraisal for the bank for Sarah Tower.

The judge ruled CBRE over-valued the gross development value and site valuation of the Sarah Tower project by 20% and 39% respectively.

In the event of a successful F+G appeal against the Part 20 liability ruling, CBRE should pay F+G £1.73m to cover 55% of its settlement costs to the bank, the judge ruled.

The judge said “it reflects the facts that F+G had a liability to the bank”, but said the bank was also “guilty of a substantial degree of contributory negligence”, adding “I have no hesitation in saying that the bank acted incompetently”.

Work was abandoned on Sarah Tower shortly after steel frame erection began on site. The site was subsequently bought by Property Alliance Group and a 12-storey Premier Inn has been built on it.

A spokesperson for F+G said: “We are disappointed with the outcome of the case but do not have the legal grounds to appeal the court’s decision.

“We are pleased to see this issue reach a conclusion.”

A CBRE spokesperson said: “We have always maintained that the claim by [F+G] was misguided and are pleased that the court has also reached this conclusion.”