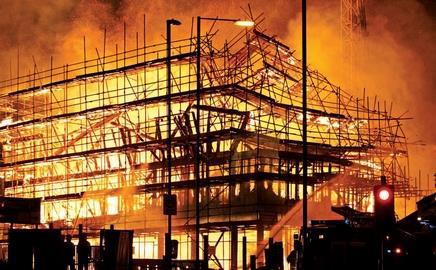 A report into the fire at the Colindale timber-frame housing development in north London last July has questioned whether this construction method should be used for high-rise buildings.

The report, which was written by the Fire Protection Association (FPA), has come to light in the week that fire destroyed a multi-storey

timber-framed student accommodation block in Newcastle-upon-Tyne (pictured above). The London Fire Brigade is also expected to release its official report into the Colindale fire in the next few days.

The FPA report indicates that a discarded cigarette was the most likely cause of the fire in Colindale, in which a six-storey timber-frame residential block at Beaufort Park, by developer St George, burned to the ground in less than nine minutes. It then asks whether “timber construction should be used for high-rise buildings”.

The report also raises the question of whether timber-frame buildings are safe once they are completed. It says greater consideration to the installation of sprinklers should be given, and to building in fire compartments during construction.

The report said: “Spacing of timber-framed buildings should be considered during the planning stage, as incomplete buildings present a much higher hazard than completed ones.”

Brian Coleman, chairman of the London Assembly and vice-chair of the London Fire and Emergency Planning Authority, has called for an end to the construction of multi-storey timber-framed buildings because of the risks to construction workers and occupiers.

He said: “Nobody in their right mind would buy a timber-frame building higher than two storeys.”

St George was unavailable for comment when going to press.

A three-storey timber-framed Persimmon development was also destroyed by fire on 27 March at Willenhall in the West Midlands. The fire brigade said there was little it could do to prevent the destruction of the building.

What should be done to improve the safety of timber-frame buildings? Email building@cmpi.biz