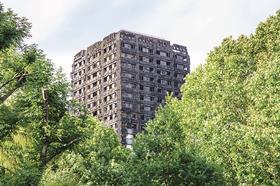 Fire experts have urged Theresa May and her government to act immediately to address safety in high-risk buildings.

In joint open letter to the prime minister the group called on the government to implement three important regulatory changes to significantly improve fire safety for high-rise and high-risk buildings, and do so with immediate effect.

For such buildings, which include schools, hospitals and care homes, the fire safety experts urged government to instantly require only non-combustible cladding and insulation be installed; that they be fitted with automatic fire sprinklers, and that all new buildings of these types have alternative escape routes.

Signatories include Jane Duncan, who chairs RIBA’s expert advisory group on fire safety and is a past president of RIBA, and Ronnie King, the honorary administrative secretary and principal adviser to the All-Party Parliamentary Fire Safety & Rescue Group, who is also a former chief fire officer.

Other experts include architects George Clarke and Sam Webb, who sits on RIBA ’s expert advisory group on fire safety, together with academics and fire sprinkler and insulation trade bodies.

Clarke said: “The rules for how we build safe homes, offices, schools and hospitals have for many years been far too open to interpretation.

“This has led to poor design decisions that have compromised fire safety and put lives at risk. What we are arguing for could be implemented tomorrow, would be extremely effective in making buildings safer, and help prevent a tragedy such as Grenfell ever happening again.”

While acknowledging official reviews are underway, the group said 10 months on from the Grenfell fire it seemed the UK was no closer to a safer system of fire safety regulation and that these steps would substantially reduce the risk still facing many buildings across the country.

Sarah Kostense-Winterton, executive director at Mineral Wool Insulation Manufacturers’ Association, said: “The government review and inquiry will run their courses, but there is every reason to make these crucial and logical changes straight away to ensure that buildings are being constructed in a safe manner.

“The government must lead from the front by taking action,” she added.

The letter to prime minister Theresa May

We are united by our resolve that a tragedy like Grenfell Tower must never happen again. Ten months on, we are deeply concerned that so little has been done to prevent another fire.

High-rise and high-risk buildings such as schools, hospitals, care homes, sheltered housing and residential blocks must be our immediate priority. To protect public safety in these types of buildings, we ask the government to implement the following changes urgently:

·         That only non-combustible cladding and insulation be installed;

·         That all new buildings of these types have alternative escape routes

The official inquiries and investigations will run their course, but we must not wait. We believe these common-sense measures will help protect people’s lives and the buildings in which they live, work, learn, and recover.  We urge you and your government to implement them immediately.