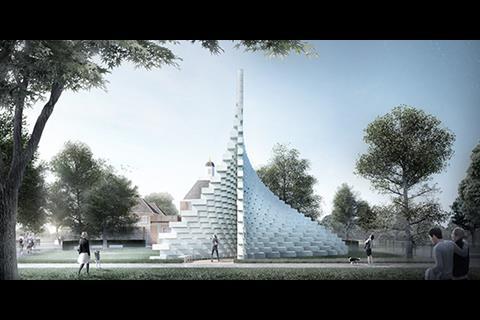 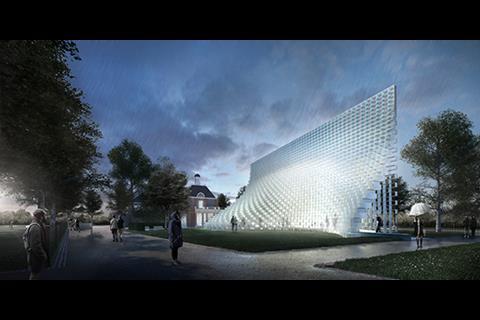 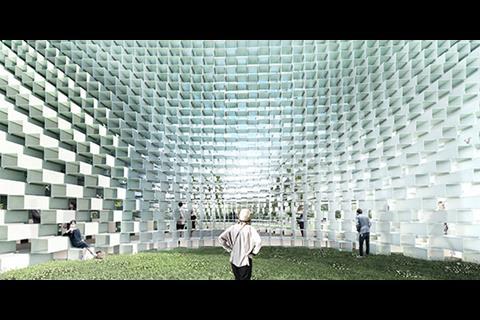 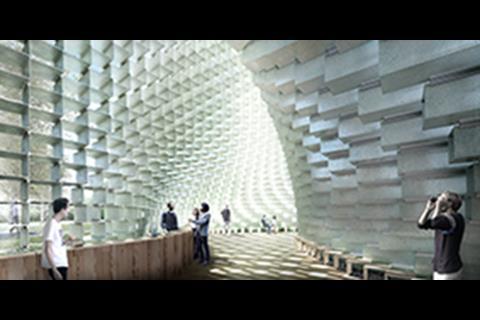 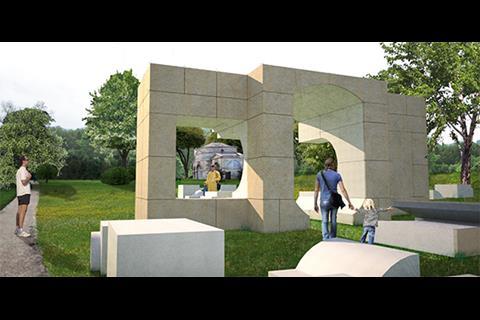 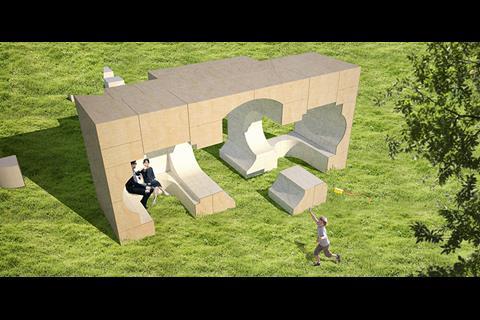 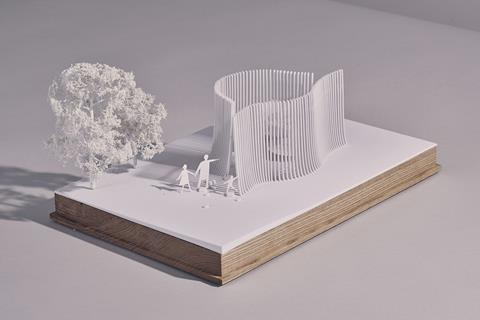 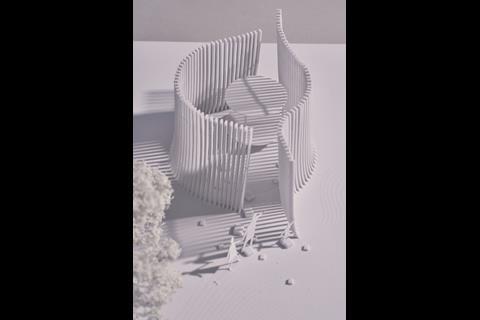 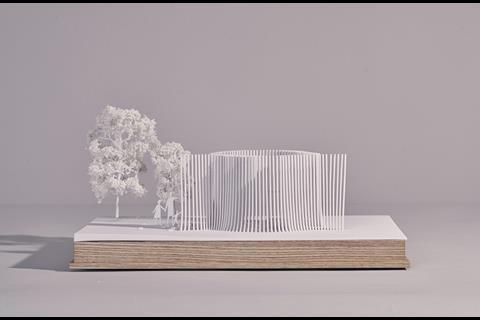 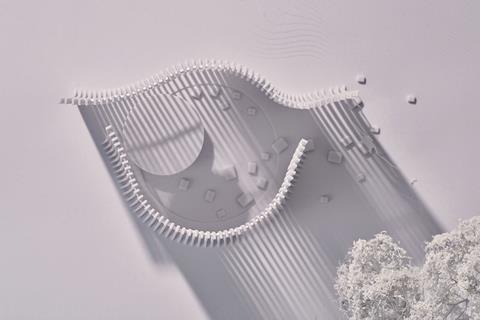 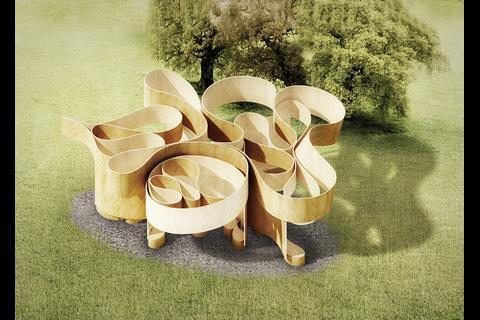 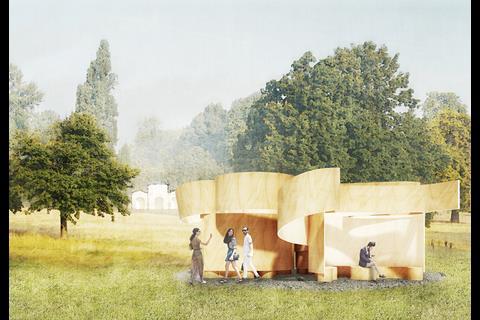 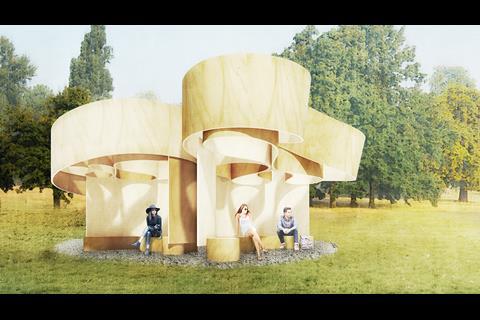 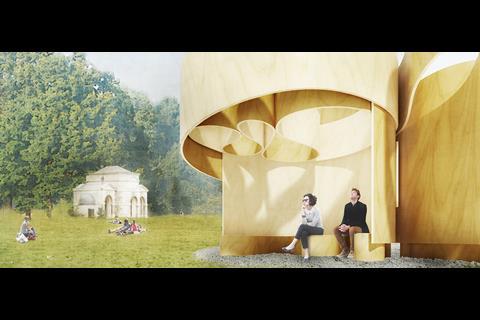 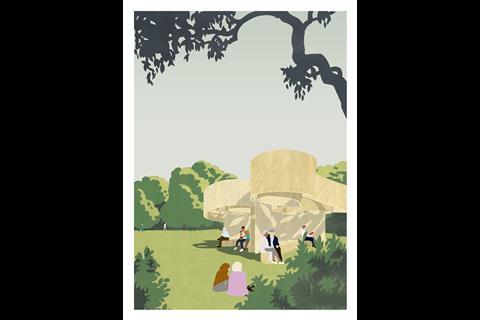 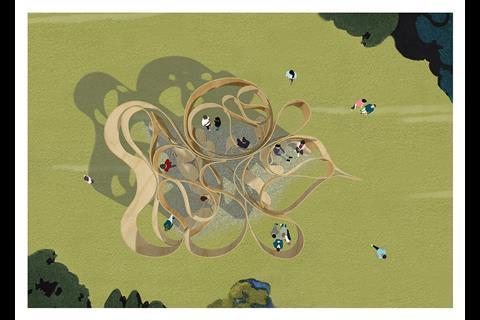 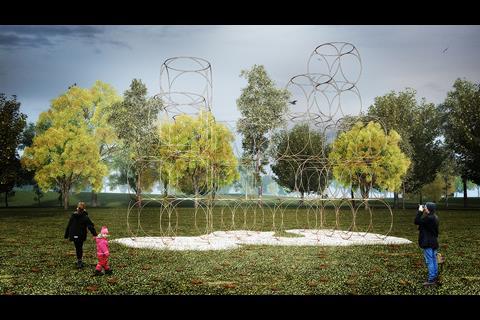 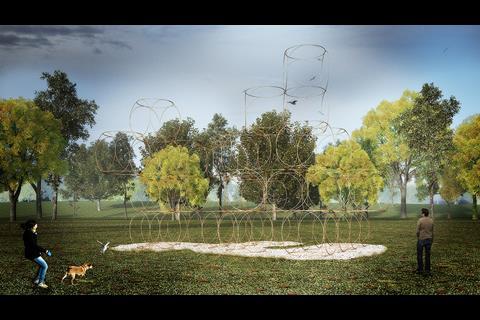 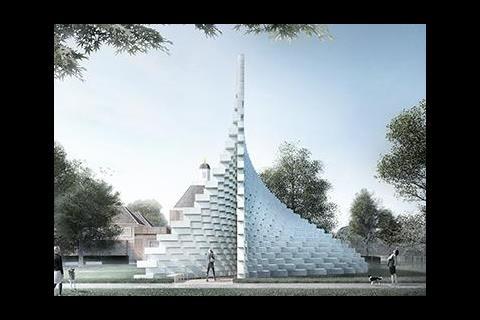 The Serpentine Gallery has released the first images of this summer’s pavilion and four summer houses.

It is the first time the gallery has commissioned more than one architect to work on its annual series.

Bjarke Ingels’ practice BIG is designing the main 300sq m pavilion which is described as an “unzipped wall that is transformed from straight line to three-dimensional space”. It will house a café during the day and the Park Nights performances by night.

Engineering and technical services will be provided by AKTII and Aecom.

The other four structures are 25sq m and are meant to be inspired by Queen Caroline’s Temple, a classical-style summer house built in 1734 close to the Serpentine Gallery.

The first, designed by former OMA architect Kunlé Adeyemi of NLÉ, is an inverse replica of the temple.

Berlin and New York-based Barkow Leibinger was inspired by another, now extinct, 18th-century pavilion, also designed by William Kent, which rotated and offered 360-degree views of the park.

Londoner Asif Khan’s design is inspired by the fact that Queen Caroline’s Temple was positioned in a way that it would allow it to catch the sunlight from the Serpentine lake.

And Yona Friedman’s summer house is a modular structure that can be assembled in different formations and builds on the Hungarian architect’s pioneering project La Ville Spatiale (Spatial City) begun in the late 1950s.

The five architects are aged from 36 and 93 and none has built a permanent structure in the UK.

The summer houses will all be erected no more than a minute’s walk from the main gallery in Kensington Gardens.

Co-directors Julia Peyton-Jones – who is leaving in July after 25 years – and Hans Ulrich Obrist said: “As you can see from the architects’ renders, Bjarke Ingels has responded to the brief for a multi-purpose pavilion with a supremely elegant structure that is both curvaceous wall and soaring spire, that will surely serve as a beacon – drawing visitors across Hyde Park and Kensington Gardens to visit the pavilion, the summer houses and our major exhibitions by Alex Katz and Etel Adnan.

“The response to design a summer house inspired by the 18th-century Queen Caroline’s Temple by our four international architects has been equally inspired and has produced four unique spaces for visitors to explore this summer.”

The pavilion and summer houses will open on June 10 and run until October 9.

We have attempted to design a structure that embodies multiple aspects that are often perceived as opposites: a structure that is free-form yet rigorous, modular yet sculptural, both transparent and opaque, both solid box and blob. We decided to work with one of the most basic elements of architecture: the brick wall. Rather than clay bricks or stone blocks, the wall is erected from extruded fibreglass frames stacked on top of each other. The wall is then pulled apart to form a cavity within it, to house the events of the pavilion’s programme. This unzipping of the wall turns the line into a surface, transforming the wall into a space. A complex three-dimensional environment is created which can be explored and experienced in a variety of ways, inside and outside. At the top, the wall appears like a straight line, while the bottom, it forms a sheltered valley at the entrance of the pavilion and an undulating hillside towards the park.

With a play on architecture, our design aims to fulfil the simple primary purpose of a Summer House: a space for shelter and relaxation. The design is based on projecting an inverse replica of the historic Queen Caroline’s Temple – a tribute to its robust form, space and material, recomposed into a bold new sculptural object. By rotating the temple’s interior void space, we expose the structure’s neo-classical plan, proportions and architectural form. Using prefabricated building blocks assembled from sandstone similar to the ones used in building the temple, our abstracted forms come together to create a room, a doorway and a window for people to interact with the building, the environment and with one another. By locating the temple in the proximity of the trees, we offer an extension of the space into the landscape, providing shaded areas in their canopies and in the shadows generated by the object. The carved out void, soft interior and fragmented furniture blocks create comfortable spaces for people to eat, rest or play – in and around the house – all through the summer season.

Queen Caroline’s Temple, an 18th-century historical summer house attributed to William Kent and situated in proximity to the Serpentine Gallery, stands – seemingly without purpose – facing a large meadow. A second pavilion, today extinct, also designed by Kent was situated on a nearby man-made mountain constructed from the dredging of the artificial The Long Water. This small pavilion rotated mechanically 360 degrees at the top of the hill, offering various panoramic views of the park and, reciprocally, different views of itself when seen from the park. It was meant both to be visible in the park and a structure from which to survey its surroundings. The little mountain and house disappeared at some point in history. With this absent structure in mind, we have designed a Summer House in-the-round. Standing free with all its sides visible, and conceived as a series of undulating structural bands, it is reminiscent of a blind contour drawing (a drawing executed without lifting the pencil up from the paper and only looking at the subject). The logic of generating a structure from loops is a self-generating one and comes from the idea of coiling material in your hands then stacking the coils upon each other. The horizontal banding recalls the layered coursing of Queen Caroline’s Temple, despite its idiosyncratic nature.

The proposed summer house builds on my project La Ville Spatiale (Spatial City) begun in the late 1950s. The manifesto for this project, published in 1959, was based on two pillars or principles: firstly, a mobile architecture that could create an elevated city space and enable the growth of cities while restraining the use of land; secondly, the use of modular structures to allow people to live in housing of their own design. The Serpentine Summer House is a ‘space-chain’ structure that constitutes a fragment of a larger grid structure, originally conceived for La Ville Spatiale. It is a modular structure that can be disassembled and assembled in different formations and compositions.

The summer house takes a circular form where the circumference has been unpeeled to connect us and the temple to a picturesque moment left hidden by William Kent almost 300 years ago. Through sun path analysis I realised that Kent aligned the temple toward the direction of the rising sun on 1st March 1683, Queen Caroline’s birthday. This effect would have been amplified by the reflection off the newly created Serpentine lake. We can imagine that the Serpentine lake itself may have been designed to amplify this annual moment, a landscape-sized mirror to reflect the sun, a possibility which John Rennie’s 1826 bridge obscures. In our summer house a polished metal platform and roof provide an intimate experience of this lost moment for the visitor. Three ‘rooms’ of differing spatial quality gently enfilade together like those in the temple. These are articulated by an undulating line of timber staves which create enclosure and direct views. The ground is a continuous gravel landscape punctuated by stepping stones, subtly elevating and measuring the visitor’s approach when entering the interior. As the structure meets the gravel it gently blends the horizontal and vertical, to appear as if the Summer House might have grown out of the ground. The project is designed to offer new experiences of the park through dialogue with Queen Caroline’s Temple and the surrounding scenery.