First phase of Barking Riverside scheme in for planning 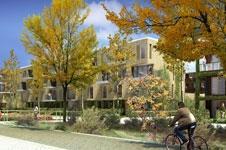 The joint venture team planning to build more than 10,000 homes in east London has submitted three planning applications to put up the first 4,000 of them.

Barking Riverside, which is made up of the Homes and Communities Agency and North-east housebuilder Bellway, has sent the applications to the London Thames Gateway Development Corporation.

The £1.9bn development will eventually see 26,000 people living across 10,800 homes at the former brownfield site. It will be built in four stages.

Stage one will feature 1,500 homes while stage two will see 2,500 homes built. Also included in these phases are plans to build two schools plus local facilities and upgrading public transport services. Work on the first homes will begin towards the end of this year.

Sheppard Robson and Maccreanor Lavington are architects on the first part of the development with Hyder the consultant.