The fit-out firm working on bust contractor Shaylor’s most high-profile project has been appointed to complete a visitor centre at the Silverstone motor racing circuit.

Glasgow-based Elmwood Projects has taken on the role of principal contractor at the Silverstone Experience Centre in addition to its ongoing fit-out work.

The centre in Northamptonshire will be run by the Silverstone Heritage charity and its chief executive Sally Reynolds said: “We were gutted that Shaylor Group went into administration last month, forcing us to postpone the opening of The Silverstone Experience.

“Elmwood Projects, who were the main fit-out contractor, have taken over as principal contractor.”

Reynolds said she was hoping to announce a new opening date in the coming weeks, adding it was expected to be early autumn.

When Shaylor collapsed last month Silverstone Experience said the news was likely to delay the opening of the centre by at least two months.

Drawn up by Cube Design, the centre has been handed a £9.1m grant from the Heritage Lottery Fund and is expected to attract over 500,000 visitors a year.

It had originally been due to open in time for last weekend’s British Grand Prix which was expected to be attended by more than 300,000 people over its three days.

Meanwhile, the council behind another notable project left stranded by Shaylor going under has said it will appoint a new contractor in the autumn.

A spokesperson for Wolverhampton city council said it was “confident” a replacement would be found over the coming weeks.

Shaylor Group went into administration on 17 June, with approximately 200 employees made redundant. 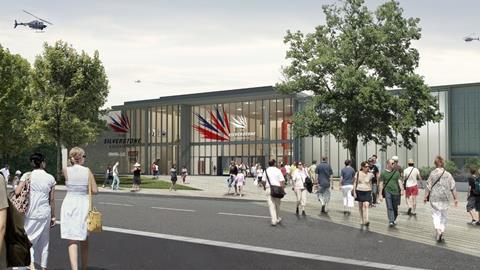 How the centre will look when finished