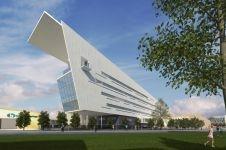 These are the big projects currently driving construction growth in Birmingham

Architect in Birmigham is undergoing a renaissance. The plans for the Central Library revealed by Mecannoo recently are the latest showstopping designs set to transform the heart of the city.

Below we run through the buildings already on site and over the next few days we will show ten more buildings which are either approved or proposed.

And bear in mind that this list of £100m-plus schemes doesn't include the £2.4bn BSF and £2.2bn highways framework. It really is boom-time Birmingham.

For commentary on the buildings to come follow Dan Stewart on a walk around Birmingham.

This regeneration of a former Rover car plant over 15 years will include 1,400 homes and 10,000 jobs over 140ha
Value: £750m
Architect: Various
Developer: St Modwen

A grant of £49.8 million from the government's Estate Renewal Challenge Fund enabled this scheme to go ahead. The area was formerly known as the Central Area Estates
Value: £350m
Architect: PRP & Gardner Stewart
Developer: Crest Nicholson

Thanks to John Cave from Birmingham past present and future for helping to compile the projects.