Five years before construction can begin on Horizon nuclear 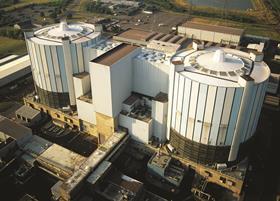 Construction is unlikely to begin on any of the planned nuclear power plants through the Horizon Nuclear Power project for another five years the new Japanese owner of the venture has admitted.

Hitachi, which this week bought the Horizon Nuclear Power project for £696m, told Building it was working up a construction budget for the first nuclear plant at Wylfa of around £20bn, but it did not expect construction to begin on the new nuclear plant for five years, as the company had yet to gain approval from the regulator for its reactor designs.

“We need to get the generic design assessment (GDA) - but that probably takes about five years. When we get the GDA we are able to start to establish the construction,” a Hitachi spokesman said.

The Horizon venture, which has land at two sites in Oldbury in Gloucestershire and Wylfa in Anglesey and the right to build reactors there, was put up for sale in March by its previous owners German energy firms Npower and E.ON.

Both the reactor designs being consider for the site under its German owners - by Areva and Westinghouse - were already in the process of gaining approval, while the project had been courting contractors Laing O’Rourke and Balfour Beatty, when Horizon was put up for sale in March.

Under the previous owners, construction of the Wylfa plant - the first expected to be built - was planned to be underway towards the end of 2015.

Alistair Smith, chair of the Institution of Mechanical Engineers’ power division, said that the process could be done in three years but that five was “more realistic”. “Everybody is keen to think it can be done quicker than five years but that’s probably a realistic time frame,” he said.

“It’s good that the deal has gone through because it demonstrates a commercial company thinks there’s a commercial opportunity for them to build,” he said.

Despite the delay until the start of construction, energy secretary Ed Davey was quick to hail Hitachi’s investment as a “huge vote of confidence” in the government’s energy policy.

Davey said the government had not offered Hitachi any guarantees about future energy prices to secure the investment and that it was the UK’s overall energy strategy which had attracted the firm. “They know our policy of no public subsidy for new nuclear. And the fact that they … are investing £700m in new nuclear suggests there’s a huge vote of confidence in that regime,” he said.

The Department of Energy and Climate Change (DECC) said the deal would see the construction of between four and six new nuclear plants, with the creation of up to 6,000 jobs during construction at each site, with a further 1,000 permanent jobs at each site once operational.

DECC said about 60% of the value of the first plant was expected to be sourced from within the UK, and more for subsequent plants. It said Hitachi planned to establish a module assembly facility in the UK.