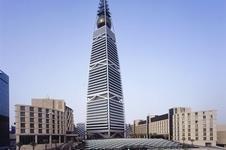 Foster + Partners has been commissioned to design a signature tower in Riyadh by the Saudi Arabian royal family.

The skyscraper will be built alongside Foster's existing Al Faisaliah development. The 266m tower, completed in 2000, was the first skyscraper to be built in the Kingdom of Saudi Arabia and the tallest until the construction of the nearby 304m Kingdom Centre in 2004.

The new tower has been commissioned by the same client, the Al Faisaliah Group, which is owned and run by the Saudi royal family. It is understood that Buro Happold, the original tower's structural and civic engineer, will also be working on the new commission.

The designs for “Al Faisaliah Two” are still under wraps, but a source close to the scheme said it would rank among the practice's most distinctive projects.

He said: “It's the next generation of Foster towers. If you think of the evolution of the practice's designs as being from the Hongkong & Shanghai Bank to the Gherkin, then this is the next stage. It will be spectacular.”

While it will be a tall building, it is understood Al Faisaliah Two will not compete in height with the proposed Kingdom Tower in Jeddah, which has been promised by King Abdullah to be the world's tallest when complete.

Foster + Partners did not wish to comment on the appointment.

The UK-based practice has been shortlisted alongside Hopkins Architects and Gensler for the Architect of the Year award in the inaugural Gulf State Building Awards. The winner will be revealed in Dubai on Thursday evening.