Frank Gehry, his pavilion, and the great British weather 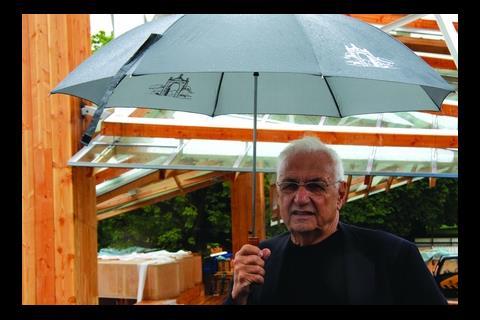 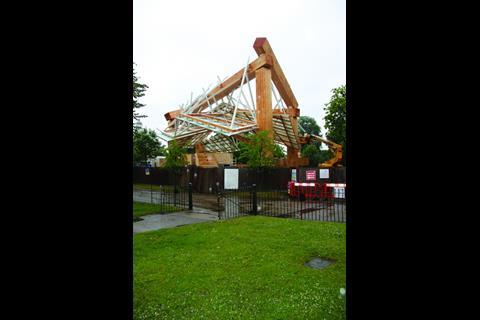 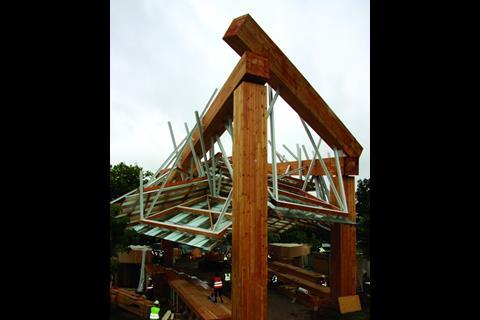 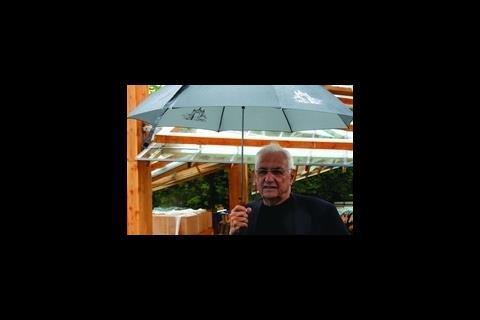 This is the summer pavilion of the Serpentine Gallery in London’s Kensington Gardens, which will be opened to the eagerly waiting world next week, and it’s not particularly summery either.

What we’ve been given instead is a gawky, hefty assembly of glass, timber and steel. Admittedly, those six large trapezoidal canopies that float at random angles high overhead do have a nonchalant, carefree appeal. But they are suspended from a massive clunking structure of timber beams and columns, also at chaotic angles.

The beams are a huge 1000mm x 1000mm square in section and self-evidently mask an inner core of structural steel. And not with any clever post-modernist irony either.

All this was revealed this morning at a press preview, which turned out to be quite a celebrity performance in itself. In attendance was a tightly packed melee of TV cameramen, photographers and notebook-weilding reporters, all herded along by a gaggle of gallery directors and PR managers.

It would have passed as an international premier performance of Hollywood’s latest blockbuster with all the big-screen stars in attendance. Not a minor, temporary work by an architect from the other side of town.

The chaos was ramped up by the whole event taking place in pouring rain. This was on the roof terrace of the Serpentine Gallery, where we were meant to look down and admire the new pavilion taking shape in front of us. But all that was visible most of the time was a forest of umbrellas, television cameras and huge shoulders of cameramen and reporters.

What we’ve been given instead is a gawky, hefty assembly of glass, timber and steel.

No performance from the white-haired celeb himself, it has to be said. He spoke almost inaudibly, made several cryptic references to disparate influences and peppered these with droll, self-deprecatory remarks.

The disparate influences he revealed were garden parties (not much in evidence), timber structures (with steel cores?), a flock of butterflies (oh yes – the floating glass canopies) and a giant military catapult conceived by Leonardo da Vinci some 500 years ago.

As for the giant catapult, you’ve got to take this as the workings of a great artistic mind. “It was the first thing that came to mind," said Gehry. "You don’t know where an idea’s coming from. It’s intuitive.”

Pressed a bit further on the matter, he switched momentarily to self-deprecatory mode: “Perhaps it’s a statement of regression of my own inadequacies.”

Asked why there were no fish motifs in the pavilion, as in Kobe and Barcelona. Quick as a flash, he quipped: “There’s always a fish lurking in the bushes somewhere.”

And finally in reference to the non-stop rain, he said: “To start with, we designed tarpaulins to catch the rain. They were eliminated to cut costs. Maybe we need to bring them back.”

So even great celebrity descendents of Leonardo da Vinci are not beneath coming up with practical design proposals occasionally.