Building has been designed by Sheppard Robson 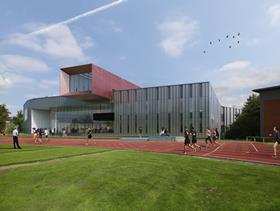 Galliford Try has formally signed a £29m contract to build a teaching and research building for Leeds Beckett University at its Headingley campus.

The Sheppard Robson-designed building (pictured) will house the Carnegie School of Sport and is part of a £200m investment the university is making across its sites in the city.

Galliford Try, which is due to unveil its annual results next Wednesday, will build a complex that will contain laboratories, a 60m covered rooftop running track, a roof terrace and a chamber which can mimic different altitudes and environments. There will also be changing facilities, a café and networking spaces for students.

Earlier this year, Liverpool contractor George Downing Construction began work on an £80m arts building for the same university at a site near the Leeds General Infirmary hospital.