Galliford Try to shrink construction arm by a quarter 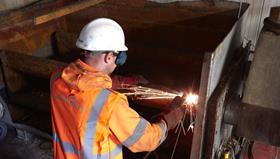 Galliford is taking the axe to around £400m of business

Galliford Try has said it will reduce the amount of work its construction business does by nearly a quarter as it focuses on three key areas and retreats from other markets.

The firm has already said it is cutting 350 people, or 10% of its UK construction workforce, as a result of losses which have mounted up on problem jobs including the Aberdeen bypass and Queensferry Crossing scheme near Edinburgh.

In a promised update to investors this morning, the firm said it had now completed its review of its construction business and is set on making it smaller – including by streamlining its management structure.

In future, the division will just focus on buildings, water infrastructure and highways.

“Plans [are] being implemented to simplify the business and management structure and to refocus on key strengths in markets and sectors with long-term growth and profitability potential,” Galliford Try told investors.

The firm says a reduction in its construction arm’s revenue to £1.3bn will generate savings of £15m a year from 2021 and help push it towards a 2% margin in 2021. Last year, construction, the group’s biggest division, had revenues of £1.7bn with just over £1bn coming from buildings and the rest from infrastructure.

Elsewhere the firm said it had traded well in its third quarter, with pre-tax profit, excluding exceptional items, forecast to sit between £113m and £123m for the year ending 30 June.

But more than a year after raising emergency cash through a rights issue, the firm reiterated that exceptional items will include a £40m write-down for restructuring and losses on legacy and ongoing contracts at its construction arm.

Graham Prothero, who became the firm’s chief executive in March, said: “We have made some difficult decisions in response to the challenges faced by the group’s construction business. The associated operational changes are being implemented across the business.”

The group’s Linden Homes business recorded a slight slowdown in the third quarter, in line with many of its competitors, with total sales, sales rate and average sales outlet all a touch down on the third-quarter figures from 2018.

Partnerships & Regeneration saw mixed-tenure sales reserved, completed or contracted up to £284m, from £175m at the same time last year, with the business having been recently appointed to build 850 homes as a partner to Homes England as well as deliver the first phase of the £6bn Meridian Water development in east London.