Gensler is the first architect to post fees of $1bn as the US giant reclaimed its spot as the biggest practice in the world in Building’s sister title Building Design’s the WA Top 100.

The firm has been swapping the number one position with another US firm, Aecom, in recent years with last year’s number one practice slipping down to second place this time.

The number of architects on the books of the WA Top 100 practices has gone up by 7% with more than 37,000 employed by the biggest firms.

The figures come as BD gets ready to publish its annual survey of the world’s largest practices ranked by the number of fee-earning architects they employ.

The big two are pulling away from the rest with Gensler now employing 2,299 architects, up from 1,614 last time, followed by Aecom on 2,100 with third placed firm, Japanese practice Nikken Sekkei on 1,700.

Gensler’s joint chief executive Diane Hoskins said the firm had benefitted from a resurgent North American market – which accounts for more than half of the practice’s revenue – as well as a return of another key market.

“The Middle East is once again an important market for Gensler,” she said. “We have also seen an increase in activity in Latin America. [It] is an area that we believe holds immense opportunity for growth in the coming years.” 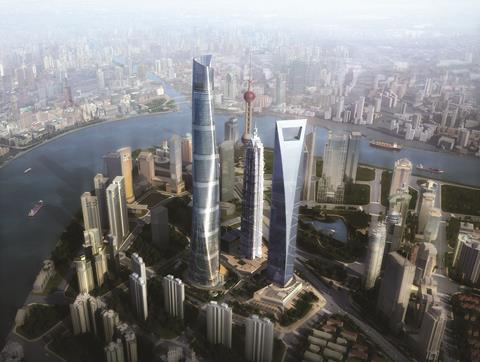 Turnover of the top 10 firms increased by 23% – double that of last year’s figure – with the global hotspots now swinging back west with North America and the UK sandwiching China as offering the best prospects for growth in the next year. Gensler, which recently got planning for a new hotel in Shoreditch for the US firm behind New York’s Knickerbocker hotel, is due to open a new office in Birmingham next year.

While China hasn’t experienced the breakneck growth of recent years, architects are not writing it off just yet.

“The amount and pace of work has certainly reduced,” said Aedas chairman Keith Griffiths. “But it’s a vast market so we are still building more there than anywhere in the world.”

The top 10 practices are dominated by North American firms with five US and one Canadian, with Aedas, which had split its nationality between China and the UK, the highest placed Chinese firm after its UK arm separated from the Hong Kong-based business last year.

Foster & Partners with 666 architects in 14th place is the highest-placed British firm with the next best home-grown practice being Atkins in 35th place with 352 architects. Foster’s has been voted the most admired practice for the tenth year in a row.

New entries into the Top 100 include this year’s Stirling Prize winner AHMM with 194 architects while firms bubbling under include PLP, the practice behind the new tower at 22 Bishopsgate in the City of London, and BIG, the Danish practice headed by Bjarke Ingels and which is working with Thomas Heatherwick on a new campus for Google in California.

BD editor Thomas Lane said: “One thing that this year’s WA100 shows is how the biggest firms have successfully adapted to big market shifts. Whatever happens in 2016, spare a though for the small practices – as it will again be the biggest firms that are best placed to cope with the changing global market.”

For more on BD subscription packages go to Bdonline.co.uk/subscribe

The list of the Top 100 architects will be published tomorrow