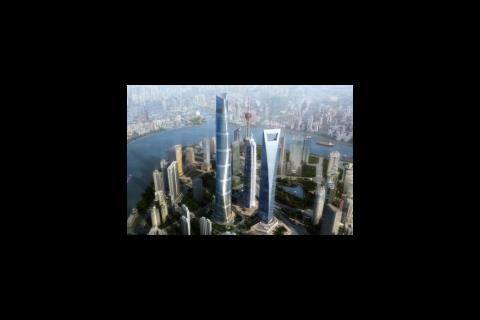 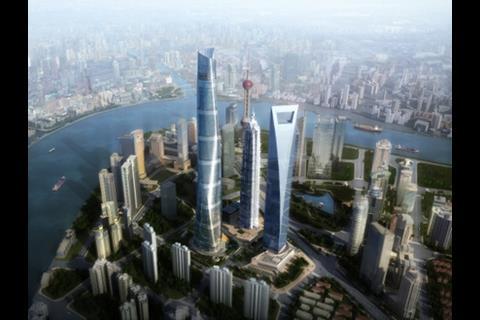 Located in the Luijiazui Finance and Trade Zone of the city, the tower – which is being developed by Shanghai Tower Construction & Development Company – broke ground last year and is due for completion in 2014.

The 128-storey mixed-use building will house a cultural institution, hotel and office space. Below-ground facilities include retail, connections to the Shanghai metro and three floors of parking.

The developer's president, Qingwei Kong, promised a “noble” skyscraper. “This tower is symbolic of a nation whose future is filled with limitless opportunities,” he said.

“With Shanghai Tower we celebrate not only China's economic success and increasing connection to the global community, but also our company's commitment to developing properties that demonstrate the highest, noblest and most exquisite design achievements possible.”

The tower, which will contain a cultural centre as well as a hotel and office and retail space, viewed from ground level
The Shanghai Tower will complete a trio of tall buildings, including the adjacent 421m-tall Jin Mao Tower and 492m-tall Shanghai World Financial Center.

Gensler chairman Art Gensler promised a sustainable tall building, explaining: “We've lined the perimeter of the tower, top to bottom, with public spaces, and we've integrated strategic environmental thinking into every move. The tower is a stage that comes to life through the presence of people.”

Structural engineer Thornton Tomasetti, M&E and plumbing engineer Cosentini Associates, and the Architectural Design and Research Institute of Tongji University as the local design institute are supporting Gensler on the project. Rider Levett Bucknall are QS on the scheme.