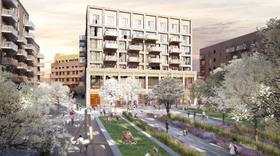 The consultant – which acted as cost manager on the project before it won planning permission in July – has had its role extended to encompass development management, and the firm will also act as employer’s agent.

The scheme will provide 527 homes in a mix of one-, two-, three- and four-bedroom flats - 278 will be allocated for social rent and intermediate housing and 249 will be for private space.
Sources close to the project confirmed they hoped to issue tenders for contractors in the first half of 2013.

Provision will also be made for 415m2 of commercial units located opposite Clapham Junction railway station and 15,900m2 of “multi-functional” open spaces.

Richard Steer, chairman of Gleeds, said: “We are delighted to have been appointed to this innovative project for Peabody.

“The development will have a wide-reaching, positive impact on the estate itself as well as the wider community and is an important step in improving the area’s social housing provision.”

The scheme is the second major regeneration job for Gleeds in south London, after the £90m mixed-use Streatham Hub scheme by Tesco’s property arm Spenhill.

Contractor Vinci has begun work on Streatham Hub - which includes 250 homes, a leisure centre and a Tesco supermarket - where Gleeds is acting as cost manager.