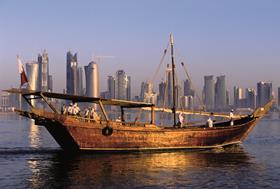 UK union the GMB has criticised UK contractors working in Qatar for so far failing to respond to a letter it sent them highlighting concerns about workers’ rights in the country.

Just one of 13 contractors working in the country - Laing O’Rourke - has responded to the letter so far the GMB said today.

GMB sent the letter to the firms last month asking for a meeting to discuss workers’ conditions in Qatar.

The news comes after Amnesty International produced a report this week claiming Qatar’s construction sector was “rife with abuse of workers”.

The GMB will travel to Qatar as part of an International Trade Union Congress trip to the country from 29 November to 2 December.

Bert Schouwenburg, GMB international officer, said: “I am disappointed at the lack of response from UK construction companies to my letter asking for a meeting in Doha to discuss how they are going to guarantee decent and safe work for both their directly employed staff and, more importantly, those working for their sub-contractors.”