Government hits out at Wolfson prize-winner 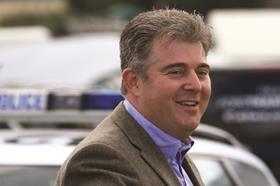 The government has hit out the Wolfson prize-winning plan for a series of Garden Cities, saying the scheme isn’t government policy and “will not be taken up”.

Housing minister Brandon Lewis said the winning Garden City proposal, from urban design and research consultant Urbed, would not be taken forward as it envisaged expanding existing towns into their surrounding green belt.

He added it had echoes of Labour’s “failed top-down” eco-towns programme.

The comments will be a blow for supporters of the Garden City movement, many of which saw the £250k competition, run and awarded by Conservative Party grandee Lord Wolfson, as a precursor to government policy changes.

Lewis said: “We are committed to protecting the green belt from development as an important protection against urban sprawl -  [the] proposal from Lord Wolfson’s competition is not government policy and will not be taken up.”

He added: “We stand ready to work with communities across the country who have ideas for a new generation of garden cities and we have offered support to areas with locally-supported plans that come forward.

“But we do not intend to follow the failed example of top-down eco-towns from the last administration. Picking housing numbers out of thin air and imposing them on local communities builds nothing but resentment.

The comments came on the same day the plan from Urbed was awarded the £250,000 Wolfson Economics Prize for its garden city proposal.

David Rudlin and Nicholas Falk of Urbed saw off competition from four other entrants for the prize - which sought proposals on how to roll out garden cities across the UK - including architects Barton Willmore and PRP.

Urbed’s submission, which was selected by the independent panel of judges from the 279 entries submitted, proposes the near-doubling of up to 40 existing large towns to provide new homes for 150,000 people per town, built over 30 to 35 years.

The entry imagined a fictional town called Uxcester to develop the concept and argued that expansion of existing towns was the best way to accommodate growth, regenerate town centres, and protect much-loved countryside and the setting of surrounding villages.

Lord Wolfson, founder of the prize, said there were “many powerful and creative proposals” entered but that Urbed’s was a “tour de force of economic and financial analysis, creative thinking and bold, daring ideas”.