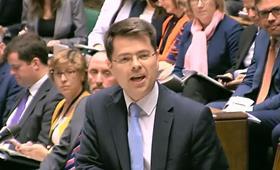 The government has claimed that new planning rules published today will help councils challenge bad housing developments more effectively and give local people a bigger say over the sort of homes built in their neighbourhood.

Publication of the revised National Planning Policy Framework (NPPF) followed a public consultation launched earlier this year by the prime minister which garnered more than 29,000 responses.

Housing secretary James Brokenshire said the government had made “a number of important changes” to the draft NPPF and the new rule book would now focus on building the right number of high quality new homes in the right locations, stronger protection for the environment and greater responsibility and accountability for housing delivery from councils and developers.

“To maximise the use of land we are promoting more effective use of the land available and giving councils more confidence to refuse applications that don’t provide enough homes,” Brokenshire (pictured) said.

And while councils have been given what Brokenshire called “real flexibility” to make the most of existing brownfield land, the revised framework meant local authorities had to “exhaust all other reasonable options for development before looking to alter a Green Belt boundary”.

The framework also sets out a new way for councils to calculate the housing need of their local community, including different forms of housing, such as older people’s retirement homes.

“This new methodology aims to deliver more homes in the places where they are most needed, based on factors including the affordability of existing homes for people on lower and medium incomes,” the housing secretary added.

The government said councils would be required to take a Housing Delivery Test from November this year, “designed to drive up the numbers of homes actually delivered in their area, rather than how many are planned for”.

Clearer guidance for developers and councils has also been published which the government said “means that developers will know what is expected of them up front, even before they submit a planning application, and councils have greater power to hold them to these commitments”.

Brokenshire added: “This revised planning framework sets out our vision of a planning system that delivers the homes we need. I am clear that quantity must never compromise the quality of what is built, and this is reflected in the new rules.”

The new rules will see 85 of the proposals set out in the most recent Budget and in the housing white paper – published in February 2017 – implemented in the new framework.

Responding to the document RICS associate director Tony Mulhall said while it aimed to bring more certainty to the planning process by settling development outcomes at the policy making stage “the challenge will be for local authorities to accurately capture at broad plan levels the complexities and distinctive characteristics of individual sites…[a] lack of skills in local authority planning departments have plagued attempts to effectively use the planning system for some time now.

“Government must recognise that to be this ambitious and bold in the planning stage and achieve value down the line, it must find ways to properly resource planning authorities.”

The British Property Federation said the NPPF “rightly embraces multi-tenure housing delivery, higher quality design of new homes and the benefits of the build-to-rent sector, [but] the nation’s town centres and the industrial and logistics sectors still require more support from planning policy”.

BPF director of real estate policy Ian Fletcher said the planning system for town centres was still too inflexible and outdated. “The way people use town centres is changing, and in turn town centres must be able to respond more quickly and innovatively to this.

And Mark Sitch, senior partner at design consultancy Barton Willmore, said he was disappointed to see that the industry’s “substantial feedback” had not found its way into the final framework.

“There are however no big surprises and no real changes. The focus remains on housing. Overall, there is less, not more, for those looking to deliver employment floorspace. This may be a critical oversight as we all move towards a post-Brexit economy.”

But Paul Smith, managing director of planning consultancy the Strategic Land Group, said that while none of the NPPF policies were “game changing in themselves, they represent an evolution of the original NPPF which has, in reality, worked quite well. The number of homes granted planning permission has almost doubled since it was introduced.”