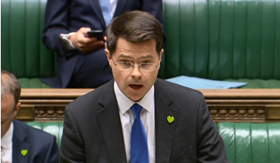 The report, which was released today, was commissioned in the wake of last June’s Grenfell Tower tragedy which claimed 72 lives.

Speaking in the House of Commons, Brokenshire (pictured) said: “Let me be clear. The cladding on Grenfell Tower was unlawful under existing building regulations. It should not have been used. But I will ensure there is no room for doubt over what materials can be used safely in the cladding of high rise residential buildings.

“Having listened carefully to concerns the government will consult on banning the use of combustible materials and cladding systems on high rise residential buildings.”

Despite not recommending a ban on combustible cladding in her final report, Hackitt said this morning said she would support Brokenshire if he decided a ban was the best way forward.

The Building Engineering Services Association has said banning cladding would not move the issue of building regulation application and enforcement forward, rather “it was the way in which the refurbishment of the tower was managed and delivered, as a whole, that should face scrutiny”.

Private sector housing bodies have also been put on notice, with the housing secretary demanding they act to address unsafe cladding issues without passing the cost on to tenants.

He said: “I find it outrageous that some private sector landlords have been slow to cooperate with us on this vital work. I am calling on them to do the right thing.

“And if they don’t I am not ruling anything out at this stage.”

“We agree with the call for greater clarity and accountability over who is responsible for building safety during the construction, refurbishment and ongoing maintenance of high-rise homes,” he said.

Brokenshire said there were too many examples of people who should be accountable for fire safety having failed in their duties.

He said: “In future the government will ensure those responsible for a building must demonstrate they have taken decisive action to reduce building safety risk and be held to account.”

“We agree the system should be overseen by a stronger regulatory framework including stronger powers to inspect high-rise buildings and sanctions to tackle irresponsible behaviour.

“We agree there should be no buck-passing between different parts of the industry, and that everyone needs to work together to change the system.”