New rules will be a disaster for housebuilding and infrastructure plans, groups warn

Worries over how the industry will staff sites up and down the country have again been raised after the government said skilled overseas workers will only be allowed to enter the country provided they have jobs paying a minimum of £30,000 a year.

And it said low-skilled trades like construction would have their pipeline of overseas workers cut off, adding that it agreed with an immigration report published in the autumn that said “there should be no dedicated route for unskilled labour from any source”.

The government has promised to consult on the £30,000 figure with opponents worried about the impact the threshold will have on sectors such as the NHS, social care and construction.

The £30,000 figure was confirmed in the government’s 168 page Immigration White Paper, published today, although ministers are expected to consult for another year on where to set the post-Brexit salary threshold for skilled immigrants.

A cap on the number of skilled worker visas that will be issued has been lifted but the government said it is sticking to advice given to it in a 140 page report by the Migration Advisory Committee (MAC) – an independent body set up in 2007 – published in September which said unskilled workers should not be allowed into the UK just because a particular industry needed workers.

The White Paper said: “The MAC has said that there should be no dedicated route for unskilled labour and we do not intend to open one.

“This is consistent with the public’s view that we should be attracting the brightest and best to come to the UK and that lower skilled migrant labour may have depressed wages or stifled innovation in our economy.”

It added: “The government agrees with the MAC’s view that there should be no dedicated route for unskilled labour from any source… There will be no general use of schemes tailored to particular industries.” 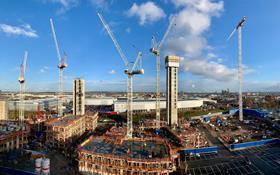 What industry figures are saying

Brian Berry, chief executive, FMB “It makes no sense to draw meaningless lines in the sand when we should base our immigration policy on what will make our economy strong and productive. The White Paper also states categorically that it will make no allowances for so-called low skilled workers. This is wrong on two levels – firstly, the definition of low skilled will cover most construction tradespeople and secondly, genuinely low skilled workers, such as labourers, are essential to the safe and smooth running of any construction site.

“From a migrant worker’s perspective, why go to the UK for just 12 months when they can settle in other countries for much longer and put down roots if they wish. The plans set out today would make it impossible to meet the government’s house building targets and the world-class infrastructure projects we have in the pipeline will be nothing but a pipedream.”

Jonathan Chaimovic, immigration consultant at Clyde & Co “It’s good news for those businesses looking to hire ‘highly skilled’ workers… Sectors dependent on low skilled labour will take some comfort from the indicated 12 month maximum visa…[but] that said, even with these concessions UK employers will have a smaller ‘recruitment pool’ for low skilled roles and face a disruption in continuity.”

Mark Robinson, Scape Group chief executive “Given that three-quarters of EU nationals currently working in Britain earn less than £30,000 in sectors such as construction, and the UK is doing nothing to encourage the 40,000 EU citizens with low skills who currently reside in the UK to remain, we are going to face a real problem come 2021 when the new system is expected to come into effect.

“The Government could ease the minds of the industry and classify construction workers as highly skilled. Construction trades require specific and detailed knowledge and it is a classification that is as arbitrary as it is unhelpful and could be hugely damaging to the UK.

“One thing is certain – we are teetering on yet another entirely avoidable cliff edge and we must change course before it is too late.”

Alan Vallance, RIBA chief executive: “A £30,000 salary threshold would be a disaster for the architecture sector, locking out talented international architects at the start of their career. We need a new attitude to migration rather than just a rebranding.”

The document also said employers “have to some extent become reliant on lower skilled workers from the EU for certain jobs. Leaving the EU provides an opportunity to drive business change and ensure that UK companies are at the forefront of innovation going forward.”

But it admitted: “We recognise the challenges faced by these employers, particularly in sectors like construction and social care, who would find it difficult immediately to adapt.”

It said it was proposing a transitional measure that will allow people to come for a maximum of 12 months. This will be followed, the White Paper added, by “a cooling-off period of a further 12 months to prevent people effectively working in the UK permanently”.

The new policy is due to be implemented at the end of the post-Brexit transition period, at the beginning of 2021.