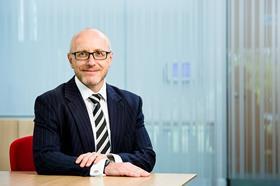 The government is facing growing criticism from subcontractors’ groups after it emerged that Kier is missing payment targets on public sector jobs.

The firm is the UK’s second biggest contractor and one of the government’s largest suppliers, with roughly half of its £4.2bn annual turnover coming from public work.

But outgoing Kier finance boss Bev Dew admitted to the chair of the business select committee Rachel Reeves that it takes an average of 55 days to pay subcontractors on public sector jobs – despite a requirement to pay all undisputed invoices within 30 days.

In a letter to Reeves dated 31 October last year, Dew (pictured) admitted only a third of its invoices on public jobs are paid within 30 days, while a third are paid in more than 60 days.

But section 113 of the Public Contracts Regulations, which were introduced in 2015, states: “Any payment due from the contracting authority [main contractor] to the [sub] contractor under the contract is to be made no later than the end of a period of 30 days from the date on which the relevant invoice is regarded as valid and undisputed.”

Kier declined to comment on its public sector payment record but said: “Our payment terms and timing of payments to our supply chain partners remains a very important area of focus for us and a responsibility we take very seriously.”

Rudi Klein, chief executive of the Specialist Engineering Contractors Group, said: “There is a statutory requirement to have 30-day payment clauses in contracts handed out under public jobs – either they are not being put in, or, if they are, there is no monitoring of them whatsoever.”

He added: “After Carillion collapsed, we asked our members whether they had 30-day payment clauses in contracts on public jobs – and they didn’t. The government needs to start taking this seriously.”

In his letter last October, Dew, who is due to leave the firm by September, also revealed that Kier “generally align[s] payment of retention monies to our supply chain to the granting of the formal ‘Certificate of Making Good Defects’ from our clients”.

But Sarah McCann-Bartlett, director general of the British Constructional Steelwork Association, which represents steel contractors told Building: “Tying the repayment of cash retentions to the final certificate is a clear breach of the [Construction] Act.”

Section 110 of the Act, which came into force in 1996, says contractors should specify a final date for payment of subcontractors’ bills, adding that the date cannot be conditional on “the performance of obligations under another contract”.

McCann-Bartlett added: “In this day and age, no company should get away with having a policy in place that breaches the law.”

Brian Berry, chief executive of the Federation of Master Builders, also joined in the criticism and said: “Late payments and misuse of retentions continue to be a major problem for SME contractors as sadly highlighted by what Kier are doing to their supply chain.

“The fact that these practices are still happening despite government regulations stating [public sector] payments must be made within 30 days demonstrate very clearly that the government needs to toughen up its act.”

The government has said firms could be barred from winning public work from September if they fail to pay 95% of all invoices within 60 days – although analysis by Building found none of the country’s biggest construction firms are currently meeting this benchmark.

Klein said the government should launch an inquiry into the compliance of suppliers to payment legislation and that the existing laws should be changed so that interest is added to money not paid within 30 days on public jobs.

A spokesperson for the Cabinet Office declined to comment on the time it took Kier to settle its bills on public sector jobs nor the call for an investigation but told Building: “The government regards developing a prompt payment culture as critical for all companies helping to deliver public services – this is an important issue particularly for small businesses which are the backbone of our economy.”

New Kier chief executive Andrew Davies is due to announces the results of a review of the business at the end of next month.