HCA 'on track' despite slump in completions 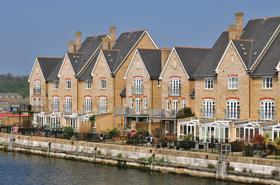 The government’s housing quango has claimed it is on track to meet its affordable housebuilding targets, despite unveiling data this week showing the number of homes it completed dropped by a fifth in the last year.

The drop, which comes after the number of homes started collapsed in 2011/12, follows a huge reduction in social housing funding in the 2010 Spending Review and a move to a new model of greater private sector funding.

It says it is 56% of the way through this programme, but given the hiatus in starts in 2011, social housing contractors will be expected to ramp up their construction programmes to hit the target.

Brendan Sarsfield, chief executive of social landlord Family Mosaic, questioned if there would be enough starts between now and September to deliver the required completions by March 2015.

“Whether there will be enough capacity among contractors will also be a major concern in the marketplace,” he said.

The HCA also announced this week that deputy chief executive Richard Hill is to leave the body in September to become chief executive of housing association Spectrum Housing Group, after seven years at the agency.

London mayor Boris Johnson this week laid out plans to build 40,000 homes a year in the capital for the next decade.

The announcement was part of his Vision 2020 document outlining what the capital needs to maintain its status as a world city. Johnson did not say how the vision will be achieved.