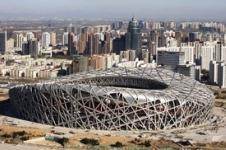 Herzog & de Meuron's “Bird's Nest” stadium in Beijing has scooped the RIBA Lubetkin prize for the most outstanding work of architecture outside the EU by an RIBA member.

The National Stadium Beijing, built for the 2008 Olympic Games, was named the winner of the prestigious award at a ceremony at the Foreign and Commonwealth Office last night.

Presenting the prize to the project team, which included Arup, China Architectural Design & Research Group and artist Ai Wei Wei, RIBA president Sunand Prasad said: “The National Stadium in Beijing will for a long time to come, and around the world, remain amongst the most memorable emblems of 2008 and of the resurgence of China as a global power.”

The other shortlisted buildings were: