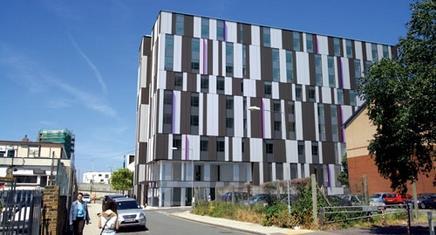 House facades are often constrained by budget, maintenance requirements, and internal layout. But that doesn’t mean they have to be boring

In theory, the issues affecting the design of building envelopes are no different for housing than for any other type of building. We still ask how it will look, how it will work, how it will be made and, of course, how much it will cost. However, there are some important differences between housing and other building types that demand particular responses to these questions.

First, housing schemes tend to be made up of relatively small and repetitive volumes. Thus, even if the internal space planning is not expressed directly in the design of the facade, it presupposes a composition made up of wall and window openings whose dimensions are limited by the sizes of the rooms behind. This does not mean that a facade composition cannot be perceived on a grand scale, just that it will be the sum of relatively small parts.

Most housing schemes that we are involved in sit in the low to medium-cost ranges, which limits the choice of finishing materials. It is rare, for example, for a “normal” housing budget to permit the use of the simple curtain walling that would be typical in a commercial office development. Even rainscreen cladding systems can place a strain on the budget. Brick, render and metals form the usual palette for housing in the UK, but there are many examples of ingenious compositions using these materials, demonstrating that limited resources are fertile ground for architectural imagination.

Affordability in use is a critical consideration in housing, whether for sale or social rent. Service charges need to be kept under control so, in all but the higher end of housing, it is assumed, for example, that landlord services will exclude window cleaning, which becomes the responsibility of residents.

Accommodating window opening arrangements and patterns that allow safe cleaning from within imposes a tight discipline on facade design compared with one that assumes professional cleaning from an external cradle system. Large, uninterrupted areas of glass are usually not an option unless combined with guard rails or balustrades, which can undermine the original design intent. (Ironically, Part N of the Building Regulations does not apply to dwellings, so professional window cleaners have greater protection in law than amateur householders.)

The requirement for all habitable rooms to be naturally ventilated results in a concentration of opening lights that makes it difficult to deliver the promise of clean lines usually contained in planning drawings and CGIs.

Although these considerations are not unique to housing, other building types are not so constantly constrained by them.

Our new foyer in Barking for East Potential encapsulates many of the issues particular to residential facade design. The foyer comprises 116 bedsits for disadvantaged 16-22 year olds with management and support facilities. Its programme is more akin to a hotel than conventional housing but that makes it a more extreme example of the difficulties of expressing highly compartmentalised volumes.

The budget for this scheme was limited but we were insistent that this should not mean that the external facade would be a direct expression of the highly repetitive spaces behind. It was also important to allow for extensive or partial prefabrication of the facade to take advantage of efficiencies that might arise. We achieved this by using a rainscreen facade so that the articulated element of the facade (the cladding) could be separated from the repetitive element (the inner leaf and windows).

The cladding was designed around a randomly repeating pattern of four combinations of Marley Eternit Natura cladding panels that were expressed in one and two-storey high bays. The inner leaf was based on two slightly eccentric window positions so that the vertical alignment of openings could be staggered.

Overall, this meant that just two inner leaf designs and four cladding panel patterns, all based on the rhythm of party walls and floor slabs, could be used to create an apparently random elevation.

Windows were designed so that they could be cleaned from inside and oversized grilles at the head of the windows unified the windows and ventilation terminals into a single element.

Eoin Keating is an associate director with architects Jestico + Whiles