Housebuilder Vistry to restart majority of jobs next week

Listed housebuilder Vistry will restart work on most of its housing sites from next week, the firm said in an update to the City this morning.

The £1.1bn turnover company, born out of the merger at the start of the year of Galliford Try’s housing business with Bovis Homes, had said it was shutting down sites on 25 March in the wake of the government’s lockdown announcement two days earlier. 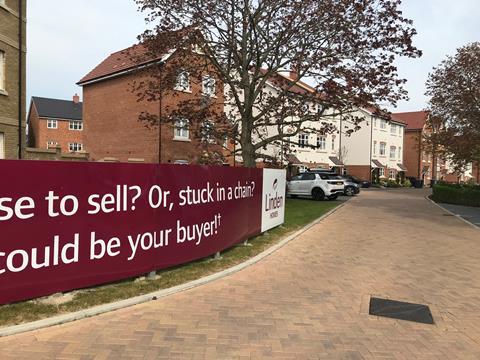 Linden Homes is now part of the enlarged Vistry business

The move is the latest sign of life returning to residential development, following news this week that student housing developer Unite is reopening some sites and brickmaker Michelmersh is firing up kilns again.

And Taylor Wimpey also said this morning it would begin a phased reopening of its sites in England and Wales from next month.

Vistry said it will recommence work on around 90% of its partnerships housing sites, where it builds homes for local authorities and housing associations, as well as a “significant number” of private sale sites. Work on private sale sites will initially focus on homes nearest completion, the builder said.

Despite lockdown measures, which have seen government guidance precluding house moves in most circumstances, Vistry said it had taken 212 reservations for new homes since lockdown, exchanged on 170 homes and legally completed 193 private sales. It has also seen 80 sale cancellations, it added.

The firm said it was re-opening sites in accordance with protocols issued by the government, Public Heath England and the HSE.

Several housebuilders have reported difficulty in getting materials to sites even where sites have remained open.

Vistry said the proportion of staff it has been forced to furlough since sites shut would reduce as work re-started.