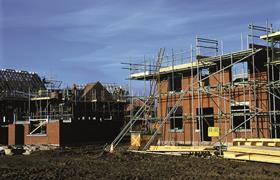 The government’s target of building 300,000 homes a year by the middle of the next decade won’t be met without sweeping changes to the way the sector operates, a new survey has found.

Research by consultancy McBains reported that fewer than half of the 400-plus housebuilders polled believed ministers’ target for housebuilding by the mid-2020s can be met.

As the Construction Industry Training Board warned that sector growth was expected to increase by just 1.3% even if the UK and EU reach an agreement before the Brexit deadline next month, firms were sceptical about the availability of land, the current planning system and the issue of skills shortages with Brexit looming at the end of next month.

While more than half of the survey’s respondents reported an increase in the number of houses they built last year, fears over the number of homers being built dominated the research’s findings.

Asked what the government should put to the top of the ‘must do’ list, respondents said they’d like to see large firms incentivised to develop more land and not hold on to plots for excessive amounts of time.

Providing more loan finance to support SME developers was also seen as a positive step the government could take.

McBains’ managing director Clive Docwra said he was encouraged by the survey’s findings that housebuilders were increasing the rate at which they were building homes but warned the lack of appropriate land, slow planning permission and skills shortages remained significant factors holding back the sector.

“In particular, the construction industry relies on thousands of skilled EU workers because of skills shortages in the domestic workforce. With these workers potentially prevented from working in the UK after the Brexit transition period ends in 2021, many housebuilders will be struggling to find the workforce needed to build the new homes that are urgently needed.”