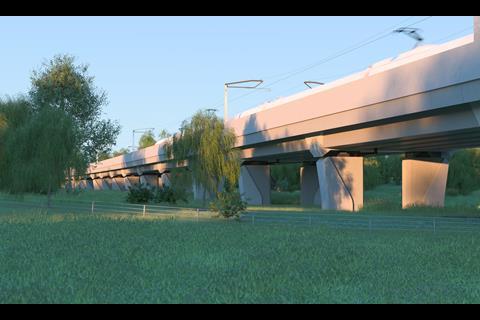 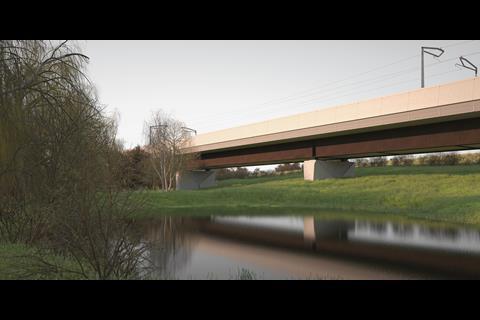 HS2 has unveiled the designs of two viaducts in Northamptonshire as the £100bn high-speed railway begins a four-week consultation for local communities in the county.

The 515m-long Edgcote viaduct spans the floodplain of the River Cherwell, south of the village of Chipping Warden. Up to 8m high, the structure will be supported by 20 pairs of concrete piers and will pass close to the site of the Battle of Edgcote.

Fought in 1469 during the War of the Roses, the battle resulted in the temporary imprisonment of the Yorkist king Edward IV. HS2 said that no evidence of the battle had been found during initial investigations, but further checks would be made before construction of the viaduct begins.

The 210m-long Lower Thorpe viaduct, located two miles to the south, will carry the railway across a small country lane close to the village of Thorpe Mandeville.

The designs for both schemes have been drawn up by one of the railway’s four main civil works contractors, EKFB, a team consisting of Eiffage, Kier, Ferrovial and Bam Nuttall, along with design partners Arcadis and architects Moxon. The public engagement event for local residents started on Monday and will be taking place online.

Both viaducts have been designed to cut a low profile within the surrounding landscape, with HS2 claiming that they will be largely hidden by existing hedgerows and woodland. A total of 17.1ha of wildlife reserves will be created across five sites, two along the route of the Edgcote viaduct and three along the route of the Lower Thorpe viaduct.

HS2 said the fen, marshland and meadow reserves, through which trains will pass at speeds of up to 250mph, will provide valuable new habitats for insects, bats, newts and amphibians.

Last week it was revealed that construction costs on HS2 had risen by £800m due to complications with enabling works and a required redesign of the line’s London terminus at Euston.