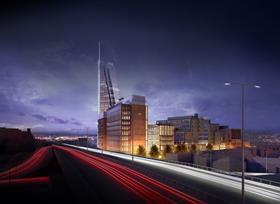 Summersgill said Imperial is considering joint venturing on the development because it is likely to feature a mix of uses, including commercial offices and private residential, rather than “100% college [buildings]”.

Summersgill added: “We have such a close relationship with industry we expect this to be something where there’s a mix of the college and industry and commerce working alongside the college, which will be quite unique.”

Imperial is currently masterplanning Imperial West South and will “potentially” submit the scheme for planning next Spring, Summersgill said.

Construction work on the first two buildings on the northern part of the planned Imperial West campus, Imperial West North (pictured), is scheduled to begin next month, with the other five buildings to be built out by 2021.