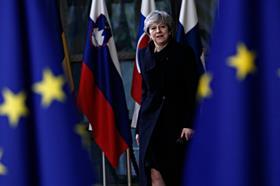 Two-thirds of the industry think the government doesn’t care enough about construction to get it a good deal when the UK leaves the EU next March.

A new poll carried out by Building of industry attitudes towards Brexit says the government has abandoned construction as a priority in its exit negotiations with the EU.

Asked whether the government was committed to getting a good deal for the industry, 65% said it was not – with just 10% saying it was.

The figure underlines the growing feeling that construction will be left to fend for itself once the deadline to leave the EU has passed.

Earlier this month, Galliard Homes chief executive Don O’Sullivan said: “Brexit has triggered huge uncertainty in the economy and what’s worse is that no one in government is advising us.”

Yesterday the government published its first round of technical papers in a series of documents outlining its preparations for a ‘no deal’ scenario, explaining the government’s approach to preparing the UK for this outcome.

But Gleeds chairman Richard Steer told Building: “I have been stunned by the apparent lack of planning and inept approach taken by the government to negotiating our exit since the vote. The government needs to find a way out of the mess it has created, and quickly.” However, he admitted: “I am not hopeful they have the wisdom, foresight or ability.”

The survey also found that three-quarters of respondents, who totalled more than 600, said the government’s current Brexit plan would be bad for construction.

The deal, agreed last month at the prime minister’s country retreat at Chequers in Buckinghamshire, includes a commitment to end the free movement of people.

Nearly 90% of respondents said there needed to be a clearer plan for tackling skills shortages in the industry before restrictions on EU workers were imposed.

Al Watson, partner and head of planning at law firm Taylor Wessing, said: “In the next five years, and perhaps longer, there are not sufficient numbers of UK people coming through into the working population who are capable of filling all of the industry roles that will need to be filled once we are out of the EU.”

More than 40% of respondents to the survey said Brexit would have a big impact on their ability to recruit from the EU.

Close to 70% of those polled wanted to remain in the EU, with 72% saying they thought Brexit would be bad for construction or were now less confident about leaving the EU than just after the June 2016 referendum.

Construction Products Association economics director Noble Francis warned firms that rely on overseas labour to look elsewhere: “Recruitment of skilled labour is likely to get harder as we anticipate restrictions on access to migrant workers.”