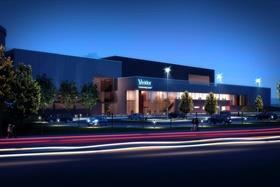 Interserve has taken a £70m hit on its delayed waste-to-energy project in Glasgow as problems on the contract continue.

It comes after the project’s client Viridor admitted to Building last month the £154m scheme was behind schedule and facing difficulties with subcontractors.

The scheme is the first confirmed job of three loss-making waste-to-energy projects that impacted on Interserve’s 2015 financial results, as flagged by the firm to investors in its results announcement in February and in a trading update last November.

In a trading update today, Interserve revealed its UK construction division has been “significantly adversely impacted by a further deterioration” in the contract.

The contractor said the problems relate to the “design, procurement and installation of the gasification plant, together with continuing challenges with the supply chain that will result in further cost overruns and delays.”

It continued: “As a result the board anticipates a £70m exceptional contract provision to be taken in the first half of 2016, resulting in a similar level of cash outflow spread across 2016 and 2017. We will be pursuing every opportunity to mitigate this situation.”

Interserve said net debt is now expected to be £35m higher than previously guided both at the half year and the year end.

The firm said all other divisions are trading in line with expectations.