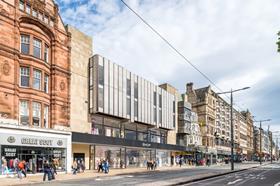 ISG has bagged contracts to build two hotels in Edinburgh, with the two jobs set to add 417 new hotel rooms to the Scottish capital city.

The first is a £20.5m scheme which will see ISG convert the former BHS store on Princes Street into a 137-bed Premier Inn.

The company’s second hotel win is the multi-million-pound redevelopment of Erskine House on Edinburgh’s Queen Street, to create a 280 ‘cabin’ hotel for Starwood Capital in partnership with Yotel.

ISG will reconfigure space within the former office building, including the refurbishment of a large double-height glazed atrium to create an impressive screening room and events space, with a destination bar fronting Queen Street.

Facilities will also include a fully equipped luxury gym and spa, and Yotel’s Club Lounge concept, with flexible meeting and co-working space.The hotel is scheduled to open in early 2019.

Scottish hotels built by ISG include the Old Course Hotel and Hamilton Grand development in St Andrews, as well as the Gleneagles Hotel and Cameron House Hotel.

The contractor also upgraded the Donald Trump-owned Turnberry golf course near Girvan on the west coast of Scotland.