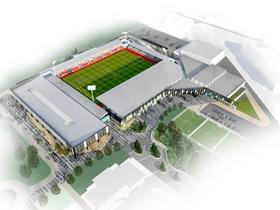 ISG has been confirmed as the preferred construction partner for the £41m York Community Stadium and Leisure Complex scheme.

The mixed-use stadium development, which ISG will build as part of a consortium led by GLL, is intended to become a major leisure destination for the North of England. As well as an 8,000-seat stadium for York’s professional football and rugby teams, it includes hospitality and conferencing facilities, a leisure centre and a community hub.

The leisure facility will house a 25m six-lane pool, with separate teaching and fun pools, a multi-use sports hall, a 100-station gym with dance and spinning studios and an extreme adventure sports zone, and three external floodlit 3G sports pitches.

ISG will also build a series of new retail units and a cinema complex.

The project is expected to commence on site in summer 2015, with completion scheduled for autumn 2016.