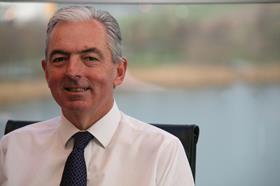 The firm said in a statement that Sutcliffe had “decided to step down” following successful completion of the merger between Keepmoat and Apollo.

Keepmoat also revealed unaudited figures for its financial year ended 31 March 2012 and announced it has completed a refinancing that leaves it “owned in a partnership between management and Lloyds Banking Group”.

The firm turned over £1bn and made a profit before exceptional items of £57m in its last financial year.

Keepmoat said its new funding arrangements replace a temporary bridging loan that it organised at the time of the merger.

The refinancing “significantly reduced” its debt and resulted in a new £125 million revolving credit facility - an increase of £50 million to allow it to “take advantage of market opportunities”.

Keepmoat said it would be able to bid on national frameworks as a result of the merger.

Keepmoat currently employs 3,200 people and operates from 22 offices across Britain.