Keepmoat has been appointed to a housing scheme in South Shields by South Tyneside Council.

The 365-home scheme (pictured) will be built at a disused docks and brownfield land site in the town. 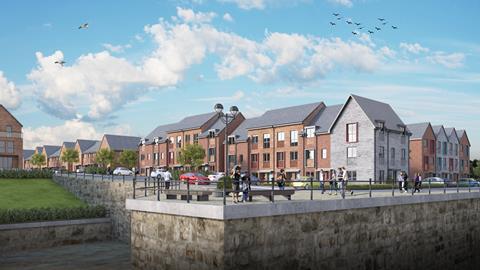 Keepmoat is working North-East developer and housebuilder Cussins with the wider scheme including a hotel and retail.

The site at Holborn, a former industrial area, has been earmarked for development for more than two years as part of a wider project to regenerate a 30-acre area including the local dockside.

The council had sought a developer partner in 2017 to bring forward a mixed-use scheme for the whole site, which at the time was in public and private ownership and had hoped to start construction on the scheme this year.

But the council said the market response “did not provide value for money and therefore [we] did not appoint a development partner at that point”. The council subsequently acquired the whole site.