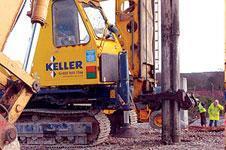 Ground engineering specialist Keller has said trading in the first four months of 2008 has been strong despite the weak housing markets in the UK and US.

In a trading update, it said the UK business had been impacted by the downturn but that the order book had been bolstered by the foundations contract for the Olympic Stadium.

It said its American Suncoast housing business, where it cut 400 jobs last year, was having a difficult first-half but that trading was no worse than it expected.

Elsewhere, its US foundation contracting business performed strongly in the private non-residential and public infrastructure sectors and it said its Middle East business was “performing exceptionally”.

Panmure Gordon analyst Andy Brown said: “These are solid trading comments from Keller. With uncertainty elsewhere in the sector today, the attractions of its positioning is further highlighted.”