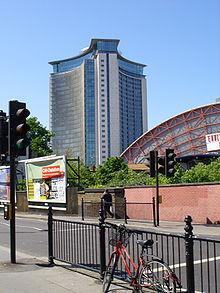 The scheme, for developer Capital & Counties (Capco), also involves other firms including engineers Arup and Cundall, conservation architect Tavernor and the architect behind the wider masterplan for the Earl’s Court area, Farrells.

It involves turning the 1960s landmark office building, currently used by the Metropolitan Police, into 340 one, two and three-bed homes plus some retail.

KPF has proposed that the building’s facades are re-clad in bronze covering 27,000 sq m. This will help to form balconies and provide improved insulation.

Capco is intending to see the scheme delivered as part of the wider masterplan for 7,500 new homes, which was signed off by London mayor Boris Johnson last summer.

The plans will be considered by Hammersmith & Fulham council.