Scheme being bankrolled by US founder of private equity group Blackstone

Incoming Laing O’Rourke chief executive Seamus French has been handed a tonic in the first week of 2022 with his new firm winning a £150m scheme to build a humanities block for Oxford university.

Called the Stephen A. Schwarzman Centre for the Humanities, the scheme will see the university’s courses in English, history, linguistics, philology and phonetics, medieval and modern languages, music, philosophy and theology and religion housed under one roof on a vacant plot at its Radcliffe Observatory Quarter site.

Designed by Hopkins Architects, the building will include a 500-seat concert hall along with a 250-seat theatre and film screening area plus a 100-seat Black Box lab for experimental performance. 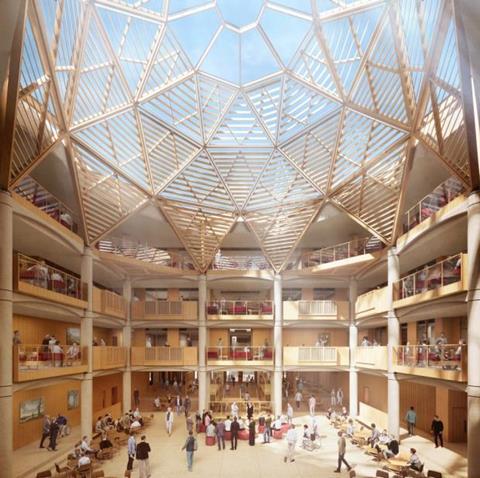 The scheme is due to open in autumn 2025

The scheme is being bankrolled by US philanthropist and businessman Schwarzman, the chairman of private equity firm Blackstone which last year bought developer St Modwen for £1.2bn, and who is reportedly worth more than £30bn. Schwarzman handed the university £150m in June 2019.

The building was submitted to the city council for planning last November with a decision due by the middle of next month. It has already won the backing of Historic England who last month called Hopkins’ design for the predominantly four-storey block “architecturally successful” while the Oxford Preservation Trust has given the scheme its blessing too.

Hopkins is understood to have beaten rival bids from Wilkinson Eyre and Stanton Williams with others working on the deal including heritage architect Purcell, structural and civil engineer AKTII, building services engineer Max Fordham, QS Arcadis and project manager CPC.

If it gets the green light, O’Rourke is set to start work this autumn with the scheme due to finish in spring 2025 ahead of it welcoming its first students that autumn.

The Laing O’Rourke team will be led by company veteran, buildings operations leader Steve Holland, who has been with the business for a quarter of a century joining in summer 1997 when the firm was known as John Laing.

Last summer, Wates began work on the university’s biggest ever construction project – a £200m Life and Mind Building that will combine the departments of experimental psychology, plant sciences and zoology into one 270,000sq ft building providing research facilities to 800 students and 1,200 researchers.

Along with Bam, both O’Rourke and Wates have been part of the university’s £1.5bn capital projects partner framework since 2019.

Other schemes O’Rourke has built for the university include the £75m Blavatnik School of Government, designed by Herzog & de Meuron which was completed in 2015.

French has joined O’Rourke from mining giant Anglo American, initially as the boss of its Europe arm and is due to take over as group chief executive from Ray O’Rourke at the end of this summer.