British Land submitted plans for £3bn development in May

Laing O’Rourke is negotiating with British Land to carry out work on one of the first two buildings up for grabs under the first phase of British Land’s huge scheme to redevelop Canada Water in east London.

Building understands the country’s largest private contractor is talking to the developer about the A2 scheme, a 180,000sq ft mixed-use project designed by Allies and Morrison.

The job is understood to have a value in excess of £100m and will include a leisure centre, retail and workspace in a building that will reach a maximum height of six storeys.

Three firms remain in contention for the plot known as A1, also designed by Allies and Morrison.

According to plans submitted to Southwark council back in May, A1 – which is located at the corner of Deal Porters Way and Surrey Quays Road – will run across six and 34 storeys and will include retail and offices as well as 186 residential units.

Mace, Wates and Kier are all chasing this deal with a winner expected early in the new year. This job also has a construction value north of £100m.

Provided the scheme gets planning, groundworks could be begin by the middle of next year with tower cranes for main construction work up by next Christmas.

A third building in the first phase, designed by Morris + Company, the new name for Duggan Morris which disbanded last year, has not yet drawn up a contractor shortlist. Known as K1, this will run across six storeys and feature 84 flats.

But it is understood British Land will look at picking a tier two contractor to carry out this work. 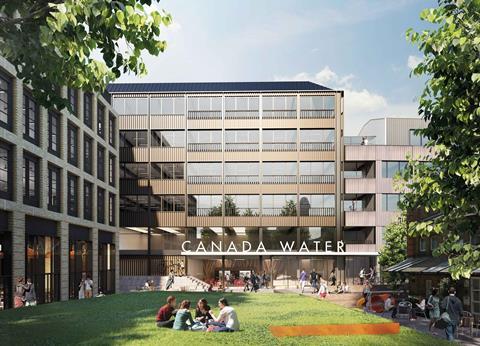 A decision on the wider masterplan for Canada Water by Allies and Morrison, also lodged with Southwark back in May, is due to be made next January.