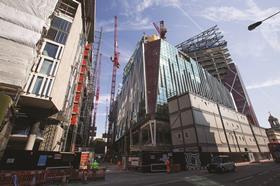 Land Securities has said Brexit is to blame after the Walkie Talkie developer posted a £95m pre-tax loss in the six months to September from a pre-tax profit of £707.9m in the first half of last year.

The firm said the decision to leave the EU has wiped £259.6m off the value off its £14.4bn portfolio.

The developer also posted a marginal 1.6% increase in its revenue to £376m up from £370m for the same period last year while analysts were cheered that underlying profits went up 4.5% to £192.5m.

The uncertainty caused by Brexit is having a “tangible effect” on commercial office property with occupiers being hesitant and supply increasing causing the amount of vacant office space to rise, the company said.

Land Securities added that it expected consumer spending to be affected by growing prices outstripping pay and subsequently increased pressure on retailers, which in turn would make it harder for the firm to grow rents.

The developer reported that its massive Nova development (pictured) in London’s Victoria was in its final phase and due to complete next year, while its office development at 21 Moorfields is in the process of demolition and enabling works with the option of a construction start next year.

Land Securities added that it had put in for planning approval for a 134,000 sq ft development in Southwark and that its plans at Selly Oak in Birmingham were moving forward with possession of the site achieved with its joint venture partner Sainsburys.

However, the firm said it was reviewing its options for the site at Worcestor Woods after planning was refused.

Land Securities chief executive Robert Noel said: “Looking ahead, we expect both our market sectors to see a general weakening of net effective rental values as a result of current uncertainty, but our high quality, well-let portfolio should mean we are relatively insulated. Also, uncertainty usually presents opportunities and we are ready to act.”