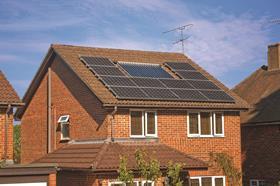 Friends of the Earth is considering legal options to challenge the government’s mooted axing of feed-in tariffs, which the environmental pressure group fears will end the UK’s solar power boom.

Friends of the Earth (FoE) has already notched up one legal victory over the Department of Energy and Climate Change (DECC) - after it launched a successful judicial review challenge to cuts made in 2012 to feed-in tariffs (FIT).

The campaign group’s renewable energy and climate campaigner Alasdair Cameron told Building the organisation is “closely examining” the option of taking legal action against any cuts to FITs proposed this time around.

Last week DECC launched a public consultation on FITs, in which it proposed potentially axing the subsidies if they are judged to be “unaffordable”. This could be implemented as early as January next year.

Cameron said it’s “too soon to say” whether FoE will pursue legal action against the government, but added: “We are examining that option closely.” He said the government’s consultation meant “they’re effectively closing FITs before solar power reaches grid parity [the price at which power generated from solar equals the price of getting power from the grid].”

John Forster, chairman of both solar panel supplier Forster Group and the Solar Trade Association (STA) Scotland, said the consultation could “close the scheme completely”. He added: “It’s unjustifiable as far as we are concerned. They’re […] suggesting there’s an overspend. We as an industry don’t believe that.”

Forster said the STA presented a plan to the new government in June, outlining how the solar industry could become subsidy-free by 2020.

However, he said the government “completely ignored” the STA’s plan, and added: “The trouble with this consultation is the options are to do nothing, make a drastic cut or close it altogether. We want them to stop now in their tracks and pick up our solar independence plan.”

DECC said it was considering cuts to FITs due to “projected overspend” on the scheme and because it is required to review subsidy schemes every three years by the European Commission.

The scheme allows households to claim money from energy suppliers if they generate electricity through renewable sources, most popularly solar panels, but also wind turbines.

In 2012 the High Court ruled in favour of a FoE judicial review challenge that a cut to feed-in tariff rates at the time was unlawful, on the grounds that the consultation on the proposed cuts ended after the date the cuts came into force for new applicants. The government subsequently lost an appeal against the High Court ruling.

Stakeholders have until 11:45am on 23 October to respond to the consultation.