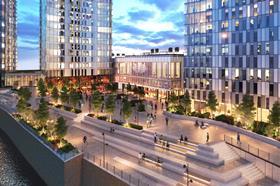 Legal & General has announced that it has acquired West Tower in Manchester’s Deansgate Square development as it continues to scale up its build to rent portfolio.

Deansgate’s West Tower, which will be made up of 44 storeys overlooking the River Medlock, is set to become the tallest BTR scheme in the UK.

The acquisition was made through LGIM Real Assets’ build to rent fund.

Working with architect SimpsonHaugh, Legal & General has made a range of significant BTR design changes to the tower.

“We are supporting wider urban regeneration through utilising existing local infrastructure and maximising land density in areas where there is a housing shortage. Manchester is the second most populated area in the UK with a particularly diverse economy.”