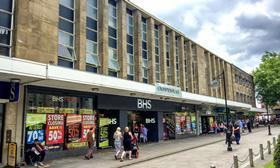 The Chinese firm set to build a tower in the middle of Manchester for former Manchester United stars Gary Neville and Ryan Giggs has joined a team looking to revamp the town centre of nearby Bolton.

Beijing Construction Engineering Group International (BCEGI) has got up until 2021 to carry out work on the 39-storey scheme in the city’s Deansgate/Peter’s Street Conservation Area.

The Bolton deal will see £250m of private investment ploughed into replacing the Crompton Place Shopping Centre (pictured) on the town’s Victoria Square with a new retail and leisure centre, the first phase of the town’s regeneration masterplan.

BCEGI has signed an agreement with a consortium called Bolton Regeneration Limited, which is made up of the Department for International Trade, the Greater Manchester Combined Authority and is being led by Midia, an investment and development specialist.

The Chinese firm is targeting the North-west as a regional stronghold with the company an equity and construction partner in the £1bn Airport City project at Manchester Airport while it is preferred contractor for a new £1bn Salford mixed-use development called Middlewood Locks.

Crompton Place was bought by the council earlier this summer for close to £15m. The existing centre will be torn down and replaced with residential and leisure units as well as shops. A planning application is due to be sent in next summer with work due to be completed by 2023.