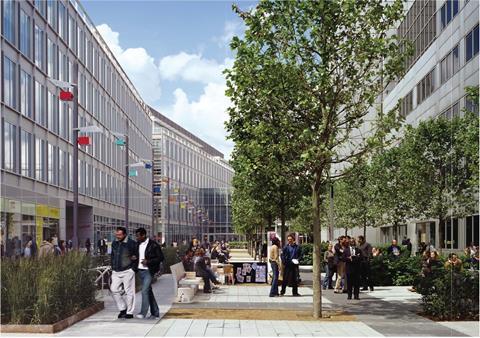 Lendlease is being lined up as the contractor for the redevelopment of the BBC’s Media Village in West London by Stanhope and Mitsui Fudosan UK, Building understands.

Stanhope and Mitsui Fudosan UK announced today they have paid £87m for the BBC’s Media Village, which will be renamed White City Place. The developer duo already own the BBC’s former Television Centre buildings next door, with Mace onboard as contractor to transform these buildings into a mixed-use scheme.

Today’s purchase includes four acres of freehold land and the lease of six buildings, three of which will continue to be occupied by the BBC.

The other three buildings - White City One, Media Centre and Garden House – are to be refurbished to provide 600,000 sq ft of space available for rent by late 2016.

Separate market sources told Building Lendlease is being lined up for the Media Village redevelopment job. Lendlease declined to comment. Stanhope has been contacted for comment.

Allies & Morrison is architect on the Media Villiage redevelopment scheme and Gillespies is landscape architect.

Commenting on the purchase of Media Village, David Camp, chief executive of Stanhope, said:  “White City Place will become the commercial heart to White City. Together with Television Centre, we will be delivering close to two million sq ft of office space and nearly 1,000 new homes over the next five years.

The BBC is hoping to save £33m in annual running costs from the deal as it continues to reduce the size and cost of its property footprint.