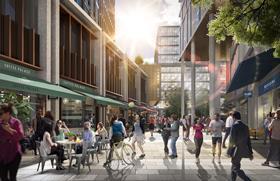 Lendlease has said that its head of development Justin Davies will take over the firm’s residential brief from the outgoing Richard Cook.

Justin Davies, who has been at Lendlease for 16 years, will take over the housing brief – including the construction of 3,000 homes at the Elephant Park development in Elephant and Castle.

Cook was in charge of Lendlease’s development at the Olympic Village for the London 2012 Olympic Games which was later turned into a residential scheme called the East Village.

The firm is also working on the nearby office and retail International Quarter (pictured) development.

Cook was previously a project manager for Mace in the Middle East and before that a managing director at George Wimpey.