Lendlease is understood to have won the scheme to carry out a major redevelopment of ITV’s former London headquarters on the South Bank.

Known as Project Vista, the scheme has attracted controversy with local opposition calling it “a swollen deformity” while the local MP said it should be redrawn.

Designed by Make Architects, the scheme was given planning by Lambeth council at the end of March, although a Lambeth planning report admitted the plans were “controversial and extremely unpopular”.

Before the planning hearing, Vauxhall MP Florence Eshalomi, in whose constituency the site is located, said the scheme would cause a “substantial degree of unnecessary harm” and called for the application to be reconsidered. 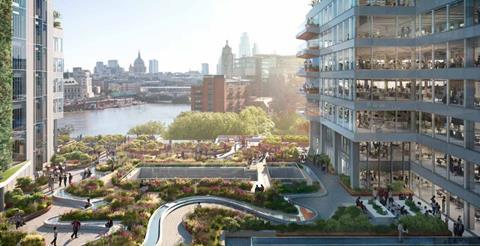 The plot was bought by developers Mitsubishi Estate and CO-RE for close to £150m in November 2019.

Their plans will see ITV’s London Studios tower flattened and replaced with two 26- and 13-storey office towers connected by a six-storey podium.

Building understands Lendlease, which last week was confirmed for a £120m scheme to retrofit a Covent Garden office block, has pipped Sir Robert McAlpine and Laing O’Rourke to the job, known as 72 Upper Ground.

The work is believed to have a price tag of between £300m and £400m meaning it will be one of the capital’s most significant new builds in the coming years.

Others working on the deal include QS Alinea, landscape architect Grant Associates and engineer Arup.

A spokesperson for 72 Upper Ground said the project would give a “real boost” to the South Bank, bringing new jobs and investment to the area.

The spokesperson added: “We have worked hard throughout the planning process to reflect on feedback from local residents and Lambeth council and have made adjustments including significantly reducing the building mass and further opening up the route through to the riverfront, while ensuring the building maintains its high-quality design and enables the delivery of key benefits such as affordable workspace and cultural spaces.”

Last week, ITV said it was moving 800 staff in London into Stanhope’s White City Place campus in west London. The broadcaster plans to move its remaining 1,200 employees in the capital into the Broadcast Centre, which was previously occupied by the BBC, by the middle of next year.