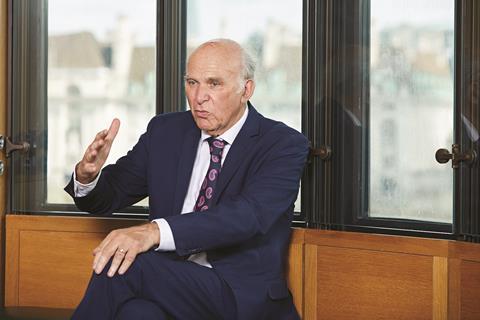 Liberal Democrat leader Vince Cable is the latest political leader to call for a rethink on Haringey council’s plans to build thousands of homes in north London in joint venture with Lendlease.

The developer will find out next month whether the new Labour administration in the borough will junk its controversial £2bn plan which has claimed the scalp of a former council leader and seen Labour leader Jeremy Corbyn wade into the row last month.

Now Cable has also entered the debate and said the council needs to tear up its deal with Lendlease and start again.

He told Building: “A lot of these urban regeneration schemes have been quite damaging. They may have made money for the council [in question] but they have been damaging for the social mix.”

Cable said his party was against the plan, called the Haringey Development Vehicle (HDV), from the off and added: “The Lib Dems in Haringey actually aligned themselves with the so-called Momentum group in order to stop the proposal. They just thought it was a very bad development.”

A cabinet meeting of the new council will meet next month, with speculation rising that the proposal will be formally ditched then.

Ejiofor, who replaced Claire Kober, the council leader who quit earlier this year after 10 years in the post, has been backed by Corbyn to scrap the HDV.

Corbyn told Building last month he expected the authority to ditch the plan: “What they will not do is the sort of agreement that was being sought with Lendlease, which would have ended up with the transfer of a lot of assets to the company.”

Meanwhile, Cable has called for a radical shake-up of legislation governing the compulsory purchase of land in the UK to stop landowners profiteering from sites earmarked for development.

The party announced its new housing policy at the RIBA earlier this week, with a proposed new body empowered to buy land at knock-down prices and an overhaul of greenbelt legislation topping the list.

The green belt had become “a kind of religion”, Cable said, and with nowhere else to go, development has begun to encroach on valuable green space in cities, such as playing fields. Instead he is proposing land swaps: “Where greenbelt land doesn’t serve an important utility function, it should be open to development and compensated by land elsewhere.”

And the former business secretary in David Cameron’s coalition government said that, in the wake of Carillion’s collapse, the government needs to be better at negotiating deals with contractors.

“Many of the tasks of constructing, say, complex new hospitals or whatever can’t be done by government, they have to be done on a contract basis. But the Carillion case showed a lot of weaknesses in the existing system. You need high quality public civil servants to be able to negotiate.”

Carillion’s PFI jobs to build new hospitals in Liverpool and the West Midlands have been stalled since the firm went bust six months ago.