Little Britain diary: Now, where did we put our sea legs? 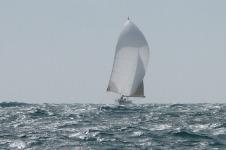 The Weightmans team start their preparations for the Little Britain sailing regatta. Only six weeks to go…

As the Little Britain Challenge Cup starts in just over a month's time, our team from Weightmans' construction department are pulling out all the stops to ensure we'll be fighting fit for the big weekend itself. Our training blog will you on our preparations and you can see how we get on…

For those of you with no sea legs, the Little Britain Challenge Cup is an annual sailing regatta for the construction industry. It sets off from Cowes on the Isle of Wight and is now the biggest regatta in the UK (after Cowes Week itself, that is). This year, action will commence on Thursday 10 September, with the grand finale set to follow after three days of exciting racing in the Solent – leaving us just six weeks to hone our sailing skills.

Our crew consists of 10 sailors. The newest member of our crew is Mike Grant, head of professional risk here at Weightmans, and everybody is determined to put him through his paces on our training day from Brighton on 22 August and help him find his sea legs!

Ed Lewis is the firm's head of construction and is now an experienced member of our crew, having been our glamorous bowman last season. I'll be taking the helm again this year and am looking forward to some exciting close-quarters regatta sailing at Little Britain 2009, once I have got back from the Fastnet offshore race later in August (more on that later).

The rest of our team is made up of clients from a number of top international construction firms who we sailed with last season, and so fingers crossed for some good results!

The construction industry's Little Britain Challenge Cup is now the biggest regatta in the UK, after Cowes Week itself

Preparations have so far stretched to arranging the most important aspects of the race: our boat and accommodation. We have arranged the charter of the yacht, which is a Beneteau First 36.7 cruiser-racer, and have ordered the all-important hull stickers, battle flags and team kit for everybody onboard.

We're going to be staying on the Isle of Wight itself, only a short walk away from Cowes town centre and the legendary Folly Inn pub – renowned for its hearty fare and salty clientele.

Apart from racing, the obvious highlights of the event will be the evening dinners. While team Weightmans have decided to give the 1970s disco-themed evening on Friday a miss (too much excitement may compromise our sailing performance the next day), we'll be taking a table at the main gala dinner on Saturday night to catch up on all the gossip from the night before.

Keep visiting the blog page to get updates on our latest training exploits!